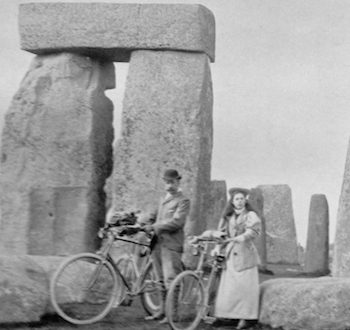 Tunnel could return Stonehenge to pedestrians and cyclists

The government has announced plans to bury the "road to the sun" – or, less prosaically, the A303 – in a bored 1.8 mile tunnel, bypassing Stonehenge. This could see the megalith-dotted landscape returned to chalkland pasture and improve amenities for cyclists and pedestrians, who currently find it almost impossible to use the perpetually busy A303. However, the planned scheme is controversial and campaign groups believe the tunnel will not solve congestion and would, in fact, increase car dependence.

Archeologists and conservationists believe only a tunnel of more than 2.7 miles in length will preserve the World Heritage Site’s ritual landscape. Since 1991, fifty-one "road improvement" proposals have been considered for the A303. The tunnel scheme was first proposed in 1994, and thrown out two years later as too costly. It reappeared in the government’s 2006 Road Programme, and withdrawn the following year. The government reintroduced putative plans for a Stonehenge tunnel in 2014, and earlier today started a three-month consultation process.

Instead of majoring on the potential for improved views over Stonehenge, the Department for Transport’s announcement of the consultation phase stressed the plans were "part of roads package to cut congestion in the south-west."

In 2013, following work on a new visitor centre, the A344 between Stonehenge Bottom and the megaliths was closed to all traffic and "grassed over". A Highways England video of the proposed new bypasses and the tunnel show that the government plans to "de-trunk" the A303 which currently runs close to the megaliths – there are no plans to close it entirely so the tunnel and bypasses are, in fact, additional road schemes, and motor traffic will still be allowed to use the "old" A303. In fact, it’s highly likely that tourists will divert on to the "old" A303 to get a drive-by view of the megaliths.

(How "de-trunking" works in practice can be examined on the A556 which was bypassed and where a non-motorised-user track was proposed for one of the existing carriageways.)

The Department for Transport’s announcement for the scheme described it as the "A303 corridor", code for the fact there will be more than just one road. Instead it’s to become a "high quality, high performing route linking the M3 in the south-east and the M5 in the south-west."

In November last year the Council for British Archaeology said there’s a "growing body of research suggesting that more radical approaches to transport policy, including a long term strategy to encourage a shift away from car-dependence, may well provide greater long-term sustainability than would any solution based on individual roadbuilding or improvement, and would welcome the opportunity to engage in discussions on this basis."

The august body stressed the international, multi-generational significance of the wider Stonehenge landscape:

"Stonehenge should be seen not as a disembodied object but as a structure (one of the oldest in the world) with architectural attributes, and a critical element in a landscape of complex ritual sites. Its calculated location should be understood as embodying meaningful visibility, functional characteristics, an intended path of approach, an entrance and much else. Decisions should flow from these insights."

Decisions probably will not flow from these insights, fear campaign organisations such as the Stonehenge Alliance. Its 2015 petition to prevent a short tunnel has 22, 500 signatures. The campaign group believes any tunnel will have to be at least 2.7 miles in length, if it is not to destroy the site’s ritual landscape.

A spokesperson said: "The Alliance does not advocate new road building at Stonehenge, but accepts the need to improve the tranquillity and appearance of the World Heritage Site and its setting.

"If the government insists on widening the A303 by means of a tunnel it must be sufficiently long to avoid any further damage to [Stonehenge] and its setting."

According to the BBC, English Heritage and the National Trust have also given their support to the option of "the longest tunnel possible".

Chairman of Amesbury Museum and Heritage Trust, Andy Rhind-Tutt, described the tunnel plan as a "self-destructing time bomb", which would "do nothing" for traffic problems in the area.

The road and tunnel construction in the chalk landscape of Stonehenge World Heritage Site will be deeper and more… https://t.co/dEwFPyPmfM

The government – bogged down with Brexit and therefore potentially unable to fund a fight against campaigners – wants to "transform the route into an expressway, a new type of strategic road which is as safe and reliable as a motorway and where ‘mile-a-minute’ journeys are the norm."

If the tunnel and bypasses go ahead it’s possible that pressure could be brought to bear to improve access in the area for cyclists and pedestrians. According to the government’s own guidelines it is now supposed to make such improvements in tandem with major road building schemes. The National Policy Statement for National Networks says that "reasonable endeavours" have to be made "to address the needs of pedestrians and cyclists." This is supposed to include "investing in locations where the national road network severs communities and acts as a barrier to cycling and walking by addressing historic problems, retrofitting solutions, and ensuring safety for cyclists on junctions."

It adds "Equestrians and cyclists would require special consideration for any proposed crossings."

However, one of the proposals being considerd for the "A303 corridor" involves the extinguishment of a great many existing public rights of way as well as part of the National Cycle Network.

"The needs and requirements for Non-Motorised Users (NMU) would be considered in a NMU Context Report and subsequent NMU audits through the design development process," promises today’s proposal from the Department for Transport.

"NMU crossings of the proposed route options would need to be grade separated either over or under the new A303 mainline. Where possible existing NMU routes would be maintained, and where this is not feasible, they
would be diverted along a suitable alternate route. NMU provisions parallel to the scheme would maintain or enhance connectivity for users, particularly within the [World Heritage Site]."

Perhaps significantly (although the devil is always in the detail) the DfT remarks that "redundant lengths of existing roads would be reclassified for NMUs and local access."

The consultation process ends on 5th March, with cycling groups among those to be consulted.