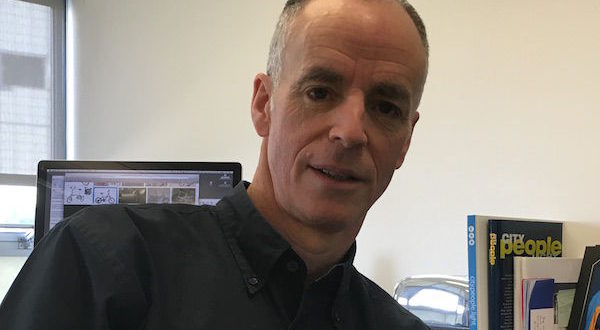 Kyffin is the Executive Dean of Design at Northumbria University – his alma mater and that of Apple’s Sir Johnny Ive – and was previously director of the Global Design Research group at Philips, the Dutch technology company. Earlier he was head of Design at London’s Royal College of Art and holds Adjunct Professorships at Hong Kong Polytechnic University and Jiangnan University in Shanghai, China. He’s also a long-time road cyclist and cycle commuter. For all of his two-wheel journeys, the wheels he chooses are 20-inch ones – Kyffin is a Moulton rider. His teenage son races on a carbon 700C prototype frame of "indeterminate manufacturing heritage".

I spent two hours with Kyffin in his academic office in Newcastle, which is strewn with both objets d’art and electronic equipment he worked on while he was at Philips.

Philips, like all innovative companies, suffers its fair share of IP theft, something that Kyffin experienced during the twelve years he was with the company, but now as an academic he takes a more philosophical approach to design rights, challenging the modern Western concepts of "ownership of ideas".

"Why is a Pinarello made in one Chinese factory labelled a fake but one produced in another isn’t? Pinarello didn’t make the carbon fibre nor the epoxy. The faking-it factory might be using the same type of carbon fibre and using the same layup and assembly technologies as the "real" factory. Which is really "real"? They are both merely assemblies of other things."

"People who buy the "real" thing are buying brand allegiance, paying towards the brand’s equity, but either way, they are getting a bike made in China. Do the "fake" frames really collapse? I’ve never heard of one of these frames collapsing. I’ve heard of people crashing into trees, but that would break any bike."

To foil the fakers companies have to keep innovating, suggests Kyffin.

"Chinese factories will quickly find a way to copy anything, but they will always be playing chase up. The fetishist consumer wants the very latest technology; it’s the commodity buyers and the laggards buying the fake stuff. If you’re the innovator you’ve got to keep ahead of the curve, or somebody else will leapfrog you. Everybody is learning from the generation before."

"Once they’ve worked out how to mould silicone and stretch it into a clip and around the housing anybody can do it. You can’t stop China copying you. The question is what do you do next? What qualities will you offer, which cannot be copied?

"The general world view is "let it go," don’t try and control everything. For design-led companies this is a bitter pill to swallow, but if your product is easy to copy make one that’s harder to copy. The future for faking is huge. It will become even more explicit."

Manufacturers with copiable products have to do more than just make and market their brand’s products, says Kyffin, they have to add value in many other ways.

"People value relationships with brands they trust and admire; they’re willing to pay extra if they feel and understand that they’re buying not just a frame but a strong relationship, becoming part of a bigger story. High-end consumers are interested in long-termism when it’s made available to them. You could say a Nissan is a fake BMW: both have four wheels, both have automatic gearboxes, both never stop. At the functional, operational level the offer is the same, yet one is four times more expensive than the other. Why? Because the BMW is said to be the ultimate driving machine, because you’re buying into the BMW family, their heritage, their story.

"Buying a particular bike shouldn’t be about just the explicit functionality of the object. It won’t even be the implied extra good things about it – it’s a bit stiffer, it’ll go a bit quicker. It’ll be what’s attractive between the producer and the consumer. It will be about more than just a status purchase, but of being part of a living community."

Consumers who "buy in" to brands value their "realness" but – get ready for some deep thinking – what is "real"? This is something that has exercised minds for thousands of years. The Greek philosopher Plato argued that reality is subjective. He imagined a group of people in a cave who have lived there all their lives. Behind them, a fire burned, throwing shadows on the walls around them. The shadows were their reality, what The Chronicles of Narnia author C.S. Lewis called living in the "Shadowlands."

"Plato suggested we are a mere reflection of true reality," says Kyffin.

Kyffin says that imitation is more than just flattery, it’s a validation of worth.

"Brands should want to have copiers because it means they have something worth copying. But then they have to put up prices to counteract the people who are doing the cheating. This makes the problem of counterfeiting a general problem, like how insurance scams put up the cost of insurance for everybody.

"It’s worth valuing the work, the enormous creative effort, which brands such as Specialized or Rapha put in. If Rapha just took ordinary clothes from someone else and put a blue stripe around the sleeve that wouldn’t be real. The commodity brands are already copies of the copies. Nobody will fake those; they have no creative or brand value. They play no part in anybody’s story."

Brands could do more to invest in retailers, believes Kyffin.

"What’s the added value of a shop? This is a really big design issue. What does Condor offer when I could go direct to a factory in Italy to buy similar frames? I go to Condor because the staff knows what they’re doing; they all recognise me when I go in; they show me around; they show me their latest thing; they make me feel valued; they make me feel good about myself. I’m willing to invest in them as a retailer of the things they distribute. I become a part, a minor actor, a bit-part in the Condor brand story."

Those who buy fakes are not "wrong" but brands ought to do more to make their products "real", believes Kyffin.

"There’s a fantastic market out there for tribute bands. People pay to watch tribute bands, but they know they’re not real, but they still have value. A product’s job is to be real, and represent the brand’s integrity."

Previous When is a Pinarello not a Pinarello? When it is a Chinarello
Next Faking bikes is as old as cycling – knock-offs are nothing new