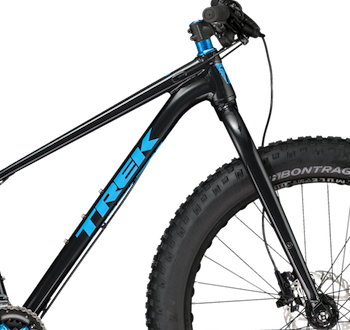 Trek has issued a voluntary recall of the 2014 Farley and 2015 Farley 6, as well as the framesets of both models. 2016 and 2017 models are not included. This recall is prompted by a pattern of five warranty requests outlining consumer comments of noise and looseness in the headset area of the affected models. An abnormality in the connection between the fork and steerer tube of these select Farley models has the potential to cause a separation at the base of the steerer tube. To date, no injuries involving the affected models have been reported.

The recall affects 4,635 bikes globally, half of which are located in the United States.

Trek says it is taking proactive measures to bring attention to this issue by contacting registered owners of the affected models, as well as by reaching out through its global network of authorized retailers. As part of this voluntary recall notice, Trek will provide through its authorized local retailers a free replacement fork, including installation. To incentivize owners of the affected bikes to bring their bikes in for the necessary replacement parts, Trek will be issuing a $100 coupon good towards any Trek or Bontrager product for every bike returned for service.

Authorized Trek retailers have been notified of the issue, and replacement parts are currently available to shops across the globe.