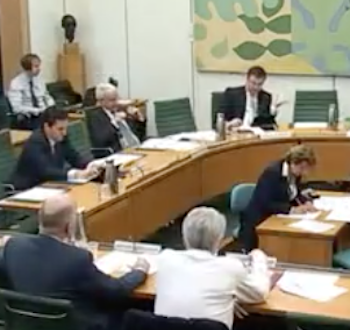 Transport minister Andrew Jones recently gave short shrift to MPs who claimed that “hard barrier” cycle lanes caused congestion. The minister was giving evidence on “urban congestion” to the parliamentary transport committee. Also grilled was a leading official with the Department for Transport who told MPs he was a regular user of London’s kerb-protected cycle superhighways.

Jones told the committee that the economic cost of congestion in the UK was around £23 billion per year. MPs Robert Flello and Iain Stewart – Labour and Conservative respectively – tried to pin at least some blame for congestion on cycle lanes. At every committee meeting Flello has to remind MPs of his “interest as chair of the all-party freight transport group” and has to reveal that his group’s administration is handled by the Road Haulage Association.

Straight after announcing that interest Flello linked congestion not to any increase in motor vehicles but to road works, bus lanes, and his latest bête noire, bike lanes.

“We have also had evidence that, even though, bus and cycle lanes create congestion, Val Shawcross is still keen to go ahead and put more of those types of schemes in London under TfL,” argued Flello. “Do you not think there is a contradiction between gathering evidence that shows that something does or does not work and then perhaps funding schemes to just do more of the same that does not work…?

Jones rebuffed the idea: “I do not really agree with that, to be honest … I am aware that the cycle lanes in London have caused a degree of controversy. TfL can come and speak for themselves, but I would suggest that they are thinking a long way ahead in relation to how they can encourage modal shift. They are trying to provide the infrastructure, looking way into the future.

Flello, chair of a body that represent the interests of diesel-spewing lorries, was having none of that: “But if that is creating congestion, which it is seen to be doing, that is not controversial; it is evidence based. Traffic levels have fallen, yet congestion and pollution have got worse.”

Jones countered: “What I think they are seeking to do with cycle lanes is to encourage modal shift to … more active mode of travel. They are thinking longer term. I am not going to try to cut across that. We should be encouraging local decision making, because the individual circumstances will be, by definition, local. Our role is to provide financial support, as well as idea support and best practice support, to help them with their decision making.”

“Even if that is creating more congestion?” pressed the MP for Stoke South.

“The people of London can choose who to have as their representatives, and can express their choice or not via the ballot box,” said Jones. “It is a local decision. … TfL are among the world leaders in making maximum use of a finite, historical urban realm for transport. They are good at it. I do not think it would be my job to wade in and say no.”

It’s indisputable that the road works that accompanied the building of London’s kerb-protected cycle highways led to increased congestion – increasing road capacity does exactly the same and that’s usually said to be short term pain for long term gain – and Jones said this was the case. However, the MPs critical of the cycle superhighways are not just critical about their building but also their continued existence.

“The construction of the superhighways caused some congestion,” admitted Jones. But, he added, the “introduction of cycling lanes [is] generally a positive, [in] that we separate non-motorised transport from motorised transport for safety purposes. I recognise that it is difficult to do work on a very busy network.”

He stressed that “separating facilities to provide safer travel for cyclists has to be a good thing” and added that “there is clear demand for more cycling facilities.”

Milton Keynes South MP Iain Stewart didn’t seem to be a fan of kerb-protected cycleways. “The cycle superhighways in London have a very hard barrier between the cycle lane and the road. We have heard some comments that in retrospect that was a mistake and that, while we should have cycle lanes, they should not have that hard barrier. That is partly to reduce the construction time and cost, but also potentially to allow the space to be used for motor traffic at certain times when the cycle lanes may not be heavily used.” He asked the minister whether that was something his department would be reviewing.

Stewart then linked cycleways with air pollution: “The cycle lanes along the Embankment are often unused when traffic is sitting stationary and belching out goodness knows what emissions, damaging the atmosphere. If you did not have a hard barrier between the two, at a very local level they could at times decide it was better for the environment to allow some of those lanes to be used for motor traffic.”

While agreeing to consider it, Jones quickly discounted the idea: “My gut feel is that we should be trying to separate wherever possible for safety purposes. I understand your point. I think it would potentially be quite difficult to achieve.”

Because of the health benefits of cycling the government’s own figures show that the creation of cycling infrastructure has off-the-scale cost-benefit ratios. However, such stellar BCRs have not filtered down to the MP for Milton Keynes for Stewart asked “Once a cycle lane like the superhighway is put in place, what retrospective analysis is made of the cost-benefit ratio? Where I live in London when I am down here, the highway was a busy road but relatively free moving in the morning peak. Now there are miles of congestion and often heavy goods vehicles sitting stationary and emitting NOx and goodness knows what else. Is that taken into consideration when planning future cycle lanes to be developed?”

Sadly, the DfTs own analysis – which shows that investing in cycling brings huge economic, social and health benefits, with some cycling schemes having BCR’s of up to 35 to 1 – has not filtered through to the minister either for he didn’t provide Stewart with a statistical rebuttal.

At this point the DfT’s Anthony Ferguson started offering his personal experience of using London’s new cycling infrastructure. The deputy director of the DfT’s traffic and technology division pointed out that, as can be seen on traffic-cams and personal videos, the Embankment cycle superhighway is often thronged with huge numbers of cyclists, and with use increasing almost daily: “I am a user of the lane outside this building. It may be quiet at some times, but when it is busy, it is very, very busy,” confirmed Ferguson.

It will be interesting to to see whether personal and professional animosity towards provision for cyclists makes it into the transport committee’s final report.

Share
Previous Do you have what it takes to join a pro race team?
Next RockShox re-releases Pike forks