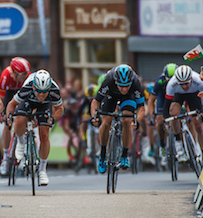 Tour of Britain to link Scotland and Wales in 2017

The OVO Energy Tour of Britain will link the capitals of Scotland and Wales in 2017, starting from Edinburgh’s Royal Mile and finishing in Cardiff city centre outside City Hall eight days later.

It will be the first time that Edinburgh has hosted the opening stage and just the fourth time since the race was revived in 2004, and the first time since 2012, that the OVO Energy Tour of Britain has finished outside of London.

Nine new venues will welcome Britain’s biggest professional cycle race, with Tendring in Essex among them, hosting a 10-mile individual time trial, the longest in the Tour since 2013.

Race Director of the OVO Energy Tour of Britain Mick Bennett said: "This year’s OVO Energy Tour of Britain route is a race of firsts, with nine new venues welcoming the race plus our first overall start in the city of Edinburgh. We will be bringing Britain’s biggest professional cycle race to new areas this September and look forward to our first finish in Wales and the chance to race into Cardiff.

"We introduced summit finishes for the first time in 2013; this year we are giving a chance to the sprinters and rouleurs in the OVO Energy Tour of Britain. Following the success of the Tatton Park finish last year we have introduced several finishing circuits, this will add a new dimension for both the sprinter’s teams, who will get to see the finish beforehand and the fans as a whole who will enjoy the spectacle of the race twice.

20 teams will race in the tour, with the identities of the squads that will make up the field to be announced later in the Summer.