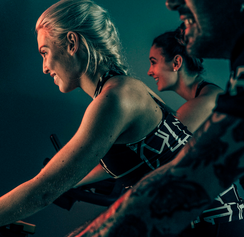 London-based indoor cycling experience One 10 set to land this July.

The pay-as-you-train boutique – which is currently located on 16 Baker Street, Marylebone in Central London – will house two studios offering varied classes. Powered by Technogym, both classes – Paceline and Nirvana – will feature the latest technology and smart-bikes.

The moment riders take their seat, the bike recognises them and logs into individual’s profiles, available and constantly measured on the One 10 app.

With the choice between an energetic ‘party ride’ with Nirvana or intense workout that pushes strength with Paceline, both studios encourage riders to break their fitness boundaries. Progress and achievements are visible throughout the class and feed into an overall score detailed on the app.

Whether a rider beat their PB, cycled from London-Brighton or had the best moves in class, they will be notified via their app with ‘badges’ added to their profile.

A statement on the company’s website claims the studio is “addictive, exciting and incredible for fitness,” whilst stating the rides are “powered by very clever technology that puts a whole new spin on things. With One 10, you’re part of an adrenaline-fuelled community, always spurring each other on to push that little bit harder.”

One 10 has been created by Tim Benjamin, former GB Olympic athlete and founder of gym franchise, The Fitness Space.

Share
Previous Cyclehoop founder Anthony Lau wins IED’s Alex Moulton Award
Next Want to bring your brand to Australia? This may be your chance