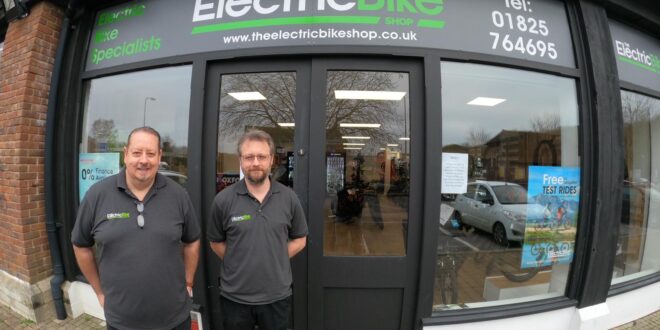 The company has been selling electric bikes for over six years. Owner Karl Haden is assisted by operations director Sean Byrne who lives locally in Sussex; the Uckfield store will be managed by Jason Stevens from Haywards Heath, who has over 38 years retail experience, with technical expertise provided by Stuart Smith from East Hoathly.

The store will have a variety of different electric bikes to suit ‘every need and budget’. Bikes supplied by The Electric Bike Shop family include models from Babboe, Cube, Gocycle, Haibike, Lapierre, Mondraker, Moustache, Raleigh, Scott and Tern. Also in store will be a large range of accessories, and the Uckfield store will offer servicing and repair of electric and non-powered bikes.

“Unlike many other retail businesses, we have had a fantastic year,” said director of operations Sean Byrne. “In 2020, we opened two more stores in Sutton Coldfield and Solihull and with Uckfield opening in January, we will have five stores with a further four planned for the first half of 2021. In bike retail, stock is king and we have a fantastic relationship with our suppliers. We have seen growth of nearly 400% including new space and we have enough stock to supply these stores and more for the next few years.”

Haden added: “Since the start of the COVID-19 pandemic, there has been a revolution in cycling and electric bikes enable so many more people, including the elderly and less mobile, to get out on two wheels. Customers who before thought that perhaps cycling as a form of transport and exercise was not viable to them have realised that e-bikes make the process so much even easier and really fun. There are loads of scientific studies showing a huge health impact from e-biking as it encourages more people to get out on a bike, it enables people to do longer trips than they might do on conventional bikes and it still requires you to do some work!

“I initially was inspired to set up The Electric Bike Shop as I was so impressed with the technology and I could see that this would change the face of cycling, we are proud to call ourselves the UK’s electric bike specialists.”

The opening will go ahead as planned despite the recently announced lockdown, with cycle shops once again being classified as essential.