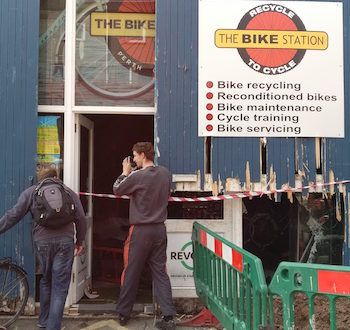 The Bike Station seeks crowdfunding to rebuild after fire

After just a day, Edinburgh’s bike recycling charity The Bike Station has raised £2000+ in a £10,000 crowdfunding appeal to get back on its feet after a fire.

Fire tore through the premises in October, and followed a break-in where £1000 was stolen. Both incidents are still being investigated, and have yet to be linked.

The fire devastated the charity’s shop-floor, workshop and office space, and creating a large hole in the roof. The building is now inaccessible, and faces months of work to be made safe.

The Bike Station has managed to move some operations to a nearby warehouse, and is operating in a reduced capacity. The crowdfunding campaign started yesterday.

Mechanics have worked hard to reopen the Bike Station secondhand bike shop, which opened for business in the warehouse just two weeks after the fire, maintaining the bike recycling side of the charity. However much of the community based work The Bike Station has endeavored to sustain over the last fifteen years has had to be put on hold, in particular their community outreach work and educational programs, such as build-your-own-bike courses that they run with disadvantaged youths.

“With the cold weather setting in, and people less likely to get on their bikes, winter is a quieter time for us, and the fire couldn’t have come at a more inopportune time.”

Backers get rewards such as bike maintenance classes and bike services.

Hynd said: “We would like to ask for help from members of the public. This could take the form of sharing our cause on social media with your family and friends or anyone you may think might be interested in helping. Any cash donations through our crowdfunder appeal would also be of great help. However small, even a few pounds will go a long way to helping us back on our feet."