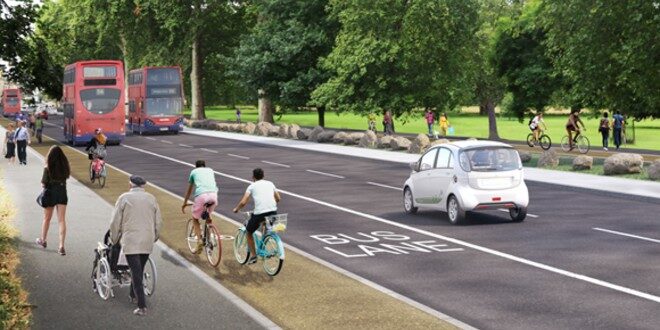 TfL, Hackney Council set out next steps for new cycleway

TfL and Hackney Council have set out the next steps for their plans for a new cycleway between Lea Bridge and Dalston.

In 2019, TfL asked local people to have their say on its plans to make roads connecting local neighbourhoods better for walking and cycling. Plans for the route include:

– An overhaul of Lea Bridge Roundabout, including protected cycle lanes, to make it safer for people to cross this junction
– A protected cycle lane westbound on Lea Bridge Road, to separate people cycling from motor traffic
– A new tree-lined boulevard for people cycling and walking within Millfields Park, with new trees, lighting and improved landscaping
– New and upgraded signalised junctions with facilities for people walking and cycling
– Changing entry to and exit from some roads along the route 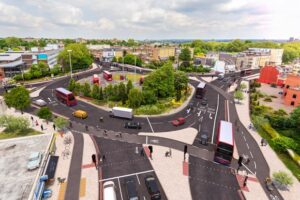 The publication of the consultation report was paused while TfL worked closely with the boroughs to adapt the pre-pandemic walking and cycling infrastructure programme into a London-wide response to COVID-19. 65% of people responding to the consultation believed the proposals would enable more people to cycle, while 51% said the same about walking.

Feedback from the consultation has been ‘hugely important’ in ensuring the scheme works for everybody, said TfL. Changes have been made to proposals in response to this feedback, including adding more trees and making changes to entrance and exit arrangements from side roads.

Construction work on the route is now planned to begin in Millfields Park in the autumn, with work planned to begin on Lea Bridge Road and at Lea Bridge Roundabout next year, subject to continued Government funding support for TfL. This means that this section of cycle route could be completed by spring 2022.

Will Norman, London’s walking and cycling commissioner, said: “I’m really pleased that construction work on the new cycleway between Lea Bridge and Clapton is due to begin this autumn. The overhaul of Lea Bridge Roundabout and new cycle lanes will make it much safer and easier for Londoners to walk and cycle and help ensure a cleaner and greener recovery from the pandemic.”

Helen Cansick, TfL’s head of Healthy Streets Investment, added: “We know that there’s high demand for safer cycle routes across London and many areas have witnessed a boom in the numbers of people walking and cycling since the start of the pandemic.

“This new route between Lea Bridge and Clapton will play a vital role in enabling more of these journeys and I’d like to thank everyone who took the time to give feedback on the plans. We’ll continue to work closely with Hackney Council on our plans to make roads across the borough healthier, greener and more sustainable.”

TfL is continuing preparation work to start construction on a number of new cycle routes later in the autumn, including routes in Hackney, Tower Hamlets and Hounslow.