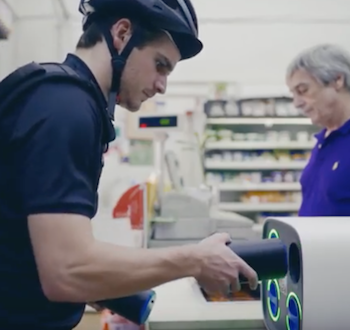 A former Tesla engineer has co-founded a company that has produced an e-bike wheel that’s powered by swappable batteries. Pushme of Bath is seeking retail outlets for its "pushpod" battery stations.

George Kalligeros is now the CEO of Pushme – he was formerly a design engineer at tesla, developing systems for the Model S. He has also worked for Bentley Motors. Pushme was co-founded by Dan Keene, a former investment banker.

The company’s 700c wheel features a Bafang 250W motor. The wheel plus batteries and clip-on wires will eventually retail for under £1,000 although early adopters can currently sign up to get the kit for £552.

The wheel is powered by a downtube-mounted battery. This can be swapped out for a fresh one. The set-up weighs 4.7kg.

Pushme asks: "Have a centrally located publicly available space, corner shop, café, restaurant? Want to make money off your unutilised mains plug and attract more footfall into your shop? We can install a Pushpod battery station free of charge."

Pushme has been trialling pre-production units with Deliveroo riders. "Pushme riders were 4 percent faster than motorcycle couriers, made 40 percent more money and had a 100 percent electric grin on their faces," claims Pushme.

Pushme Bikes Limited was incorporated in 2016 and earlier this year it attracted undisclosed seed-investment from SOS Ventures of New Jersey.

The idea for swappable batteries on electric vehicles has been around since the late 1890s – Albert Pope’s Columbia electric taxis of New York City could be fitted with fresh batteries within minutes. Pope had earlier made bicycles and is known as the "father of American cycling".