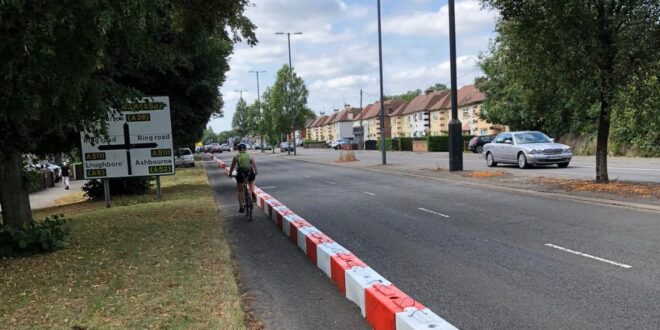 The existing cycle lane marked on the road was segregated as a temporary measure as part of the ’Moving Derby Forward’ programme, which saw the council receive £228,000 of funding from the Government to introduce COVID-19 emergency transport measures across the city.

“Local authorities had to act quickly to deliver schemes that would have a high impact, and encourage safe active travel, whilst creating more space for social distancing,” said the council. “All measures had to start within four weeks of receiving funding and be delivered in eight.

“The council, along with most other local authorities in the country had to acquire whatever temporary equipment was available at the time, and make the best solution, within the specific time constraints set by the Government. The programme did not insist that any specific design standards were achieved, it was very much a direction to take emergency action.”

Other work to improve walking and cycling on Uttoxeter Road will continue to be delivered. This includes the removal of some historic laybys, as well as widening the footway to create more room for bus users to queue.

A spokesperson for Derby City Council said: “Whilst the segregation did offer some protection to cyclists, following a review, it was highlighted that the road doesn’t offer the width required to deliver something more permanent. There are also drainage and seasonal debris issues. It has also become apparent that the cycle lane is not achieving the intended purpose, with many cyclists choosing to use the adjacent footway or the wider footway on the opposite side of the road.”

The ‘Moving Derby programme’, which also included large scale segregated cycle lanes on London Road, changes to traffic in the city centre, and the redirection of traffic in Darley Abbey and Spondon, have all been implemented, and there will be a process of rolling reviews for each of them.

Previous Repente adds gravel-specific Artax GL to saddle range
Next Cycle lanes ‘could get 15.7 million Brits on their bikes’