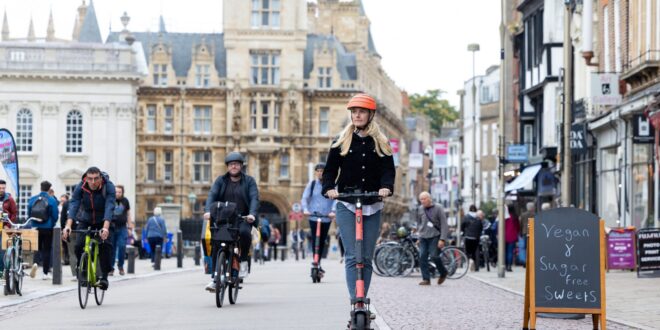 E-scooters are being trialled across the country (Picture: Voi)

Tell us your thoughts: Will you sell e-scooters through your business?

The wave of electric scooters has swelled massively in recent years, as trial schemes have popped up in cities and towns across the UK.

While the Government is testing the feasibility of e-scooters on the roads in certain parts of the country, the use of privately owned e-scooters on public roads in this country is still illegal.

Despite the threat of fines, penalty points and police impounding scooters, consumers continue to purchase the machines both online and in stores, as retail giants like Halfords, GoOutdoors and Decathlon stock e-scooters.

But we want to hear from you, BikeBiz readers, to get your thoughts on the sale of e-scooters.

Are you tempted to sell e-scooters through your cycling business, despite the legal issues for consumers? What impact would selling e-scooters have on your business? Does the government legislation impact your decision?

Fill out our questionnaire to let us know your thoughts. A selection of answers may be used in future BikeBiz articles, online and in print.

Fill in the questionnaire here, or follow this link:

Government trials on e-scooter use are being run up and down the UK, including in London, Bristol, Liverpool, Newcastle and Southampton, as companies like Lime and Voi are running app-based scooter sharing schemes.

The current trials are scheduled to run until March 2022, at which point the Government will enter into discussions about whether to legalise private-use machines on the roads.

Meanwhile in Ireland, the Government there has approved a new Road Traffic Bill which legislates for the use of e-scooters and e-bikes on Irish roads for the first time, bringing the use of private scooters a step closer.

The legislation in Ireland will limit the speed of e-scooters to 25km/h (15.5mph), with local authorities given the power to set a lower limit of 20km/h on specified roads. It will also be an offence to supply an e-scooter to anyone under the age of 16.

Tags e-scooters Tell us your thoughts