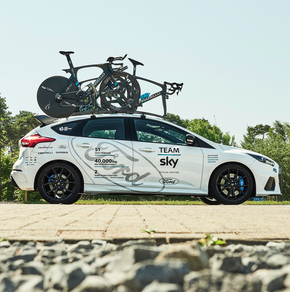 Team Sky has announced a new two-year partnership with Ford Motor Company as the exclusive supplier of cars and vans throughout 2019.

The new Focus RS features a mechanical limited-slip differential, a custom‑made bicycle rack and Recaro seats that were specially developed for the team. The seats are flatter and enable the driver and support team more freedom to move inside the car. These non-shell seats also make it easier to quickly get in and out of the car in race situations.

As with the Mondeo wagons used by Team Sky’s sport directors, the Focus RS has been modified to handle ever-changing race scenarios, road conditions and weather. They are also prepared to cope with more than 350 kilograms of added weight, including spare bikes and wheels, drink bottles, tools, and even a large coolbox.

“We’re delighted to be extending our partnership with Ford – a company with the same principles of tackling challenges that we at Team Sky have,” said team principal Sir David Brailsford. “Ford vehicles play a vital role for Team Sky and their knowledge and support makes them an integral part of our team.”

“Racing on two wheels is increasingly capturing the imagination of sports fans across Europe – and is underpinned by the best possible support on four wheels. We are excited to continue to support Team Sky in their pursuit of further cycling success,” added Ford of Europe vice president of marketing, sales and service Roelant de Waard.