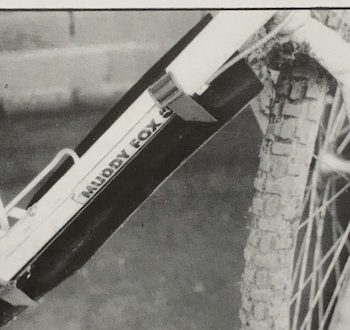 I started writing about bikes thirty years ago. The market for bikes in 1986 was rather different from today. For a start, mountain bikes were starting to go mainstream, and would soon sell in their millions. The year before – and not yet a bicycle writer – I knew all of the mountain bikers in town, and any new ones would be quickly added to the friendship-and-ride group. By the end of the eighties mountain bike ownership had become so normal that if you followed and then introduced yourself to a random person on a mountain bike you’d be marked down as a nutter. Pete Tomkins was part of the pre-boom set. We were at the Peebles mountain bike race together – not that we knew this at the time – and therefore witnessed the start of mountain biking “going professional” (the Peebles race is famous for the entry of roadie cyclo-crossers Tim Gould and David Baker riding Peugeot-badged bikes which were, in fact, made by custom framebuilder Chas Roberts).

I found out we were at the same, legendary race when chatting with Pete for this profile of his business. Pete is one of the executive producers of the documentary film “Mountain biking: the untold British story”, which has footage from the Peebles event. As far as I can tell Pete’s not in the footage, but I am: writing notes for a piece in Peter Lumley’s “Bicycle Times”. That race was dry as a bone, but if my memory serves me correctly many of the other seminal races of the late 1980s were mud-fests. It’s not like this modern mud; 1980s mud stuck to bikes and clogged up cassettes. With so much crud around to foul up drive trains and besplatter Oakley Factory Pilot Eyeshades it made sense for somebody to make a MTB-specific mudguard that worked. And Pete made that leap, creating the Crud Catcher in 1991. Just as Baker and Gould professionalised the sport of mountain biking so Pete “Mr Crud” Tomkins professionalised a product we had been fitting to our bikes for some time.

Back in 1987 I introduced the world to an invention of my mate’s – a piece of plastic strapped to the frame. This was a modification of my idea to fit lunch-box lids to the front and rear of my bike. Instead of commercialising these ideas we just got on with riding. Pete also got on with riding, but his business brain saw an opportunity, and he created the first Crud Catcher. This sold like billy-o. Instead of laughing all the way to the bank with the proceeds from his first design he ploughed all of the cash into an improved tool to make an even better product. He’s now stinking rich, with horses in paddocks, a beautiful house in Annecy, and – according to him – no real day job (apart from personally answering all emails to his Mr Crud website, and cleaning out the stables).

I don’t for a second begrudge him for this success. I created a (daft) bodge-job and publicised it in a magazine instead of making it. I’m a communicator; Pete is a maker. He went out and made what was a daft product into a real one, a money-making one. It’s been brilliant to witness his success – it’s possible to make a lot of money in the bike industry.

While the Crudguard was relatively crude, although fantastically marketed, Pete’s Mk 3 Roadracer road-bike mudguards are anything but. Fastened to a carbon bike – or an alu gravel bike – with a much stronger version of Velcro, the design for the Mk 3 Roadracer has been expertly polished by Jamie, Pete’s son. It’s a clever product and deserves to, again, sell in huge numbers – there’s now no reason to get a soaking from the rider in front of you on a club run.

Long before I became a mountain biker I was a cycle tourist. I was living in Norfolk at the time, and went to get a broken Claud Butler Majestic frame fixed by a Norwich bike technician. This was bike design guru Mike Burrows, and my review of his autobiography is also on BikeBiz.com. I knew Mike because I used to race with him. Sort of. He’d turn up to local time trials on very early versions of his gold-medal-winning Lotus Superbike dressed in a Lycra skinsuit complete with Lycra balaclava. I thought he was bonkers (I still do) but there was always method in his madness.

Pete and Mike are like chalk and cheese, from very different social and educational backgrounds, but they found their calling in the world of bikes, and each, in their own ways, have helped to shape this industry of ours. Both are mavericks, not content with the way the world is, always tinkering, sometimes improving. I’m proud to know them.