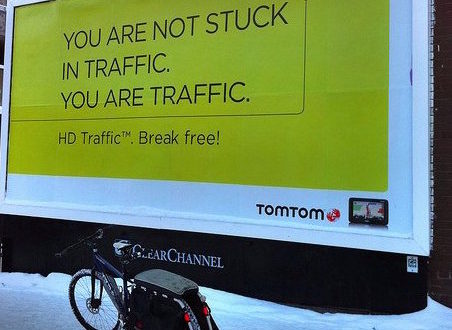 0.2 percent of the roads in London have been equipped with protected cycleways yet the Sunday Times today claims that road congestion in the UK is caused by "the squeezing of road-space by segregated cycle lanes." Mark Hookham, the newspaper’s transport correspondent, listed that as the second of four reasons blamed for worsening congestion in the UK. (The other reasons were the growth of white van deliveries thanks to internet shopping, increasing numbers of mini-cabs and badly planned roadworks.)

The claim that "segregated cycle lanes" – of which there are a tinier number nationwide than there are in London – are causing congestion in the whole of the UK is not backed with any evidence yet is now there in black-and-white on the front cover of a supposedly "serious" newspaper.

On 5th October a similar claim was carried on the front page of the Daily Mail, which also claimed that cycleways cause pollution, as if London wasn’t already plagued with particulates.

The piece was headlined: "Cycle lanes lunacy!" and claimed that "more and more are being built across Britain," adding that "the maddest thing of all [is] they’re often EMPTY." Many roads are also empty outside of the peak, but there has been no Daily Mail cover story on that.

Transport for London has said the addition of cycle superhighways has, in fact, seen a higher capacity of moving people, disagreeing with the view that they have increased congestion. Cars take up a lot of room yet often contain just one person – a road with fifteen cars on it looks full and busy; a cycleway with fifteen cyclists on it, using space efficiently, doesn’t look busy.

Complaining about the cycleway on London’s Embankment journalist Tom Rawstorne wrote that: "Traffic has been brought to a virtual standstill" ignoring the fact that the Embankment has long been jammed with motor traffic. The cycleway along the Embankment replaced not a travel lane but space set aside for coach parking.

But the “cycle lane lunacy” isn’t just confined to London, claimed Rawstorne. "From Cambridge to Cornwall, lanes are being marked off for bicycles, and residential streets are being turned into rat runs by desperate motorists looking for a way past the jams," he wrote.

The articles in the Sunday Times and the Daily Mail are similar to many other motor-centric pieces that have been published down the years, written to appease the kind of folks sitting behind steering wheels looking to blame anyone but themselves for the amount of cars in front of them, or, as car satnav maker TomTom put it in a 2010 outdoor poster: “You are not stuck in traffic. You are traffic.”

National newspapers could include such obviously pertinent statistics in their stories about impending gridlock, but don’t.

The report in the Sunday Times was based on data crunched by traffic info specialist Inrix. Graham Cookson, the company’s new chief economist, believes that congestion is a sign of a healthy economy, and London’s jams, he said, are mostly caused by the construction boom.

London’s Road Modernisation Plan includes the installation of "intelligent" traffic lights, Cycle Superhighways and the redesign of key junctions. Cookson said the construction of the protected cycleways impacted on congestion but will reduce it in the long term. It’s a “short term pain for long term gain," he said on the Inrix blog.

[The 0.2 percent mileage stat at the head of this article was calculated thus: miles of London’s roads = 9197. Miles of protected cycleways = 18.]
Share
Previous Get your tickets for the Cycling Media Awards
Next Specialized UK welcomes Simon Homer as new MD