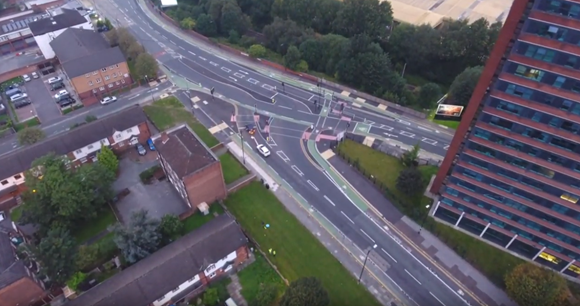 The completion of Stretford Cycleway also marks a £42 million investment into cycling across Greater Manchester as a whole.

Chris Boardman said: “This is another great example of new, safe cycling infrastructure being delivered in Greater Manchester to encourage and empower people to get out of their cars and feel more comfortable making every day journeys by bike or on foot.

“It marks a real step forward in terms of where we want to be, and more people on bikes will help to tackle both air pollution and congestion.

“But it is only the start, we will now be looking carefully at the junctions the scheme runs through to build on what has been delivered and ensure this route is integrated into the wider Bee Network, meeting our high standards and getting a full seal of approval.”

The final section of the scheme to be completed was the key West Point junction, where Talbot Road, Chester Road and Stretford Road all meet. This now has a dedicated cycle phase, with mini traffic lights that will boost safety by separating people on bikes from motor vehicles as they enter the junction travelling towards the city centre.

Councillor Stephen Adshead, executive member for environment, air quality and climate change at Trafford Council said: “It’s great to see this new cycleway up and running for the people of Trafford and further afield, helping them to include more active travel in their daily routines, whether that’s walking or cycling the school run, a quick trip to the shops or as part of their commute to work.

“We’re keen to keep the momentum going and develop more infrastructure to encourage active travel for our residents and this is only the start.”

The Stretford Cycleway improvements were made possible by funding from the national Government’s CCAG (Cycle City Ambition Grant) fund. The funding was split into two phases, the first worth £20 million of investment over 49 schemes.

Overall, the projects received £42 million of investment into new infrastructure, including a flagship cycling and walking corridor on Manchester’s Oxford Road and Wilmslow Road, plus new cycle routes across the region, as well as five new cycle-friendly district centres.

It has also involved ten schools which have been benefitting from the Cycle Schools and Colleges project which included funding for secure bike parking.