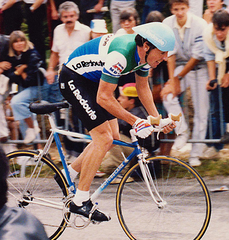 BikeBiz Awards organisers can officially confirm that cycling legend Stephen Roche will attend the 2017 industry ceremony in collaboration with the London Bike Show.

Few in the world of cycling haven’t heard the name Stephen Roche. The ex-professional cyclist led a blinding 13-year career that included amongst other high-profile victories becoming the second of only two cyclists to win the Triple Crown of victories in the Tour de France, Giro d’Italia and Vuelta a Espania stage races.

The cycling legend will make a social call at the 2017 BikeBiz Awards on February 16th to honour high-achieving stores, local independent shops and giant online retailers; awards will also honour distributors and wholesalers, brands and those providing essential specialist services for the industry, from training to advocacy. Equally important is the chance that the BikeBiz Awards offer for the trade to meet, chat and make new business contacts.

The last handful of tickets is now on sale for the 2017 BikeBiz Awards, which take place at the Aloft at the ExCeL in London. With under a month to go until the event, BikeBiz publisher NewBay has advised those planning to attend the event to order ASAP via the official website.