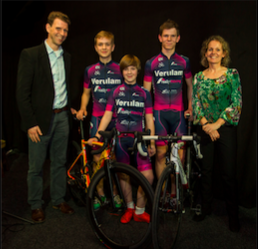 Sponsors sign up for launch of Herts racing team

A new racing team, which was formed by the local Verulam Cycling Club, has found co-sponsors in reallymoving.com and local beauty clinic Ellisix – both of whom are sponsoring a team for the first time.

25 members of the Verulanium Cycling Club have been invited to join the team, which is focussed towards youth riders but also includes a mix of seniors and veteran riders. The team will be guided by former professional rider Marcel Six who will lead as directeur sportif. He will be responsible for coaching the team with race preparation, team building and tactics.

Verulam Cycling Club chairman Doug Driscoll explained: “This is our way of putting something back into the sport; we will take great pride in having created the opportunity for talented riders in the area to get into cycle racing. We will follow their progress with much enthusiasm.”

Coach Marcel Six added: “This is a fantastic opportunity for many of the talented riders in Hertfordshire. There is a lot of training to be done and I look forward to helping them achieve their potential. Look out on the podiums for the distinctive Verulam reallymoving.com Racing Team strip.”

The club is now in its 90th year and currently contains over 450 active members. The club commented that its youth development program has been running for two years, thus the concept of a racing team made logical sense.

Founder and CEO of reallymoving.com Rob Houghton concluded: “We have watched VCC grow and encourage more and more young riders over the years; we are delighted to be supporting the next chapter for this exceptional club.”