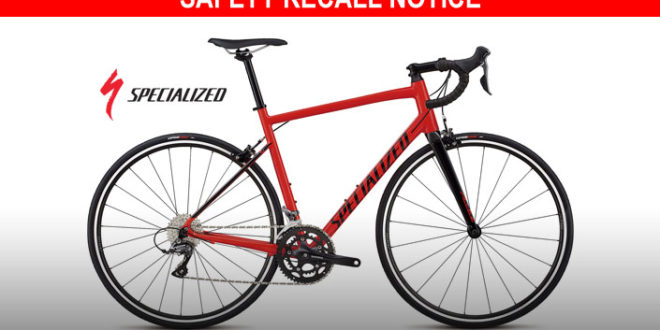 "Further to the stop sell notice on the current Specialized Allez, Allez Sport and Allez Elite, we have now received approval for an official fork recall to these bikes," Specialized UK’s William Watt told BikeBiz.

"We have now gone live to our dealer partners and riders with details and information on this."

"We are starting to rework riders’ bikes now with replacement forks. The goal is to back in the market with free stock late March/ early April."

In a statement on their website at the weekend, Specialized’s director of engineering, Mark Schroeder, said:

"After careful examination, we’ve concluded that some model year 2018 Allez, Allez Elite, and Allez Sport model bikes may contain a manufacturing defect in the fork crown which potentially affects safety. Therefore, we’ve decided to prepare for a recall which will involve replacing the existing fork with a new fork."

This recall was later made through the US Consumer Product Safety Commission, CPSC.

"By this letter, we’re asking riders to stop riding, and our dealers to stop selling, affected bicycles. Even though, to our knowledge, no one has been injured and no regulatory agency has brought this to our attention," continued Schroeder.