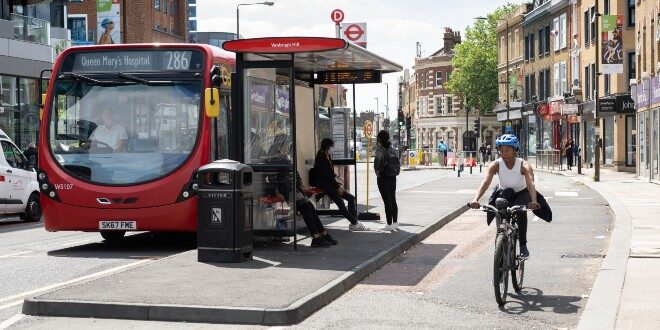 TfL is set to start construction work on the next section of Cycleway 4 in Deptford, a new cycle route that is already enabling thousands of safer and easier cycle journeys across the area each week.

Sections of the route, which will run from central London to Greenwich when finished, have already been completed between Tower Bridge Road and Rotherhithe and on Creek Road in Deptford. Construction is starting on Monday on the next section of the route on Evelyn Street in Deptford and the work is expected to be completed in spring. Once complete, the scheme will create:

Recent TfL cycle count data shows that thousands of people continue to make the most of new and upgraded cycle routes and infrastructure across the capital. Along the upgraded CS7 route in Balham, an average of 3,400 people were counted cycling each weekday in June and July. Meanwhile, on Bishopsgate in the City of London, around 7,300 people were counted cycling on weekdays, with 2,200 people counted along C9 in Chiswick. 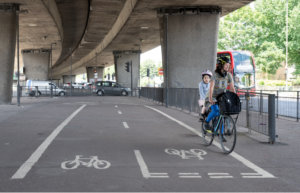 Once work on Evelyn Street is complete, people in local communities and beyond will be able to cycle between central London and Greenwich on a safer and mostly protected cycle route.

The route has previously been extended in both the east and the west, using trial measures as part of TfL’s emergency response to the pandemic.

A series of trial changes have extended the route from Tower Bridge Road to London Bridge, making it even easier to access central London along a safer cycling route. Trial changes have also been brought in between Greenwich and Charlton, using cylinders to protect people cycling from motor traffic along a route that includes the Angerstein Roundabout, where a man was tragically killed cycling in 2018.

TfL will keep residents and businesses along the route informed as construction progresses along the road. From 16th August, lane and road closures and turning restrictions will be in place at certain times along the route. Traffic management will be used to narrow traffic lanes and also for pedestrian diversions. All diversion routes will be clearly signed and there may be delays while travelling on the A200 Lower Road, A200 Creek Road and from the A2209 Deptford Church Street. TfL is advising people travelling in the area to plan ahead and to consider alternative routes.

Heidi Alexander, deputy mayor for transport, said: “Thousands of people are already benefitting from new and upgraded cycle routes across London, and the next phase of Cycleway 4 will make a huge difference to those cycling around Deptford. Making it easier to walk and cycle in the capital is key to a green and sustainable recovery from the pandemic, and it’s really exciting that this key route between central London and Greenwich is going to be improved.”

Nick Fairholme, TfL’s director of project and programme delivery, added: “Ensuring that people have sustainable options for travel is an essential part of the capital’s recovery from coronavirus, and this next section of Cycleway 4 will make it even easier for adults, children and families to cycle around Deptford and beyond. We’d like to thank people in the area for their patience as construction work continues and advise people using local roads to leave more time for their journeys.”

TfL is continuing preparation work to start construction on a number of new cycle routes later in the autumn, including routes in Hackney, Tower Hamlets and Hounslow.

Since May 2020, more than 100km of new or upgraded cycle lanes have been built or are under construction, along with more than 22,500 square metres of extra pavement space reallocated for people walking. New Santander Cycles docking stations were added along Cycleway 4 in Southwark and at Canada Water, Bermondsey and Clapham Common Tube stations in 2020 and TfL is committed to expanding the scheme further across London over the coming years.

The measures mean people are increasingly using bikes to get around their local area and for exercise, with recent TfL data showing cycling has increased by 22% in outer London compared to spring 2019, with a 7% rise in inner London.

This continued investment in walking and cycling is also central to achieving the Mayor’s Vision Zero goal of eradicating all deaths and serious injuries from London’s roads by 2041. TfL’s Safer Junctions programme is part of this work, making life-saving changes at some of the capital’s most dangerous and intimidating junctions. TfL’s Direct Vision Standard, which reduces lethal blind spots on lorries, is also already helping to save lives and prevent life-changing injuries.

The scheme requires owners of Heavy Good Vehicles (HGVs) weighing more than 12 tonnes to apply for a free permit that assigns vehicles a star rating based on how much the driver can see directly through their cab windows in order to be able to drive in London. Since its introduction, more than 70,000 HGVs have had safe systems fitted, improving protection for people walking, cycling or riding scooters or motorcycles and saving lives.

Speed limits have also been reduced to 20mph on a number of TfL roads across the capital and TfL is currently consulting on reducing the speed limit on 13km of roads within Westminster.