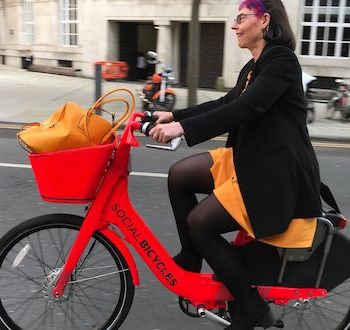 Last month Social Bicycles inaugurated the world’s first dockless e-bike scheme in Washington DC, and has now told BikeBiz that it is seeking to expand to four other US cities by next summer.

Social Bicycles’ e-bike program is called Jump, with Jump DC having started at the end of September under the District Department of Transportation’s dockless bike share demonstration program that runs through April of 2018. Trips cost $2 for 30 minutes.

Each Jump e-bike has a 250-watt front hub electric motor limited to a maximum pedal-assist speed of 19mph. All bikes feature GPS to facilitate finding a bike, and an integrated U-lock. Jump bikes can also sync with DC’s SmarTrip card to let people without smartphones access the bikes.

Social Bicycles’ business development officer Joanna Jacob told BikeBiz: "We have plans to rapidly expand and are on track to have Jump programs in at least five major cities by next summer, including Washington DC, San Francisco, and Seattle."

Social Bicycles was founded in 2010 by ex-transportation planner Ryan Rzepecki, the company’s current CEO. It is based in Brooklyn and has 12,000 dockless bike share bikes in more than 40 cities across the world, including the Nike-sponsored Biketown of Portland, Oregon and Brighton Bike Share of Brighton and Hove in the UK.