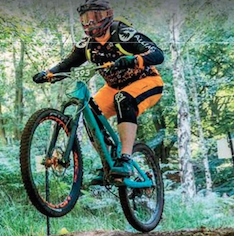 Sitting down with Alliance MTB

There is a certain image that enters the mind of a cyclist when they think of trail riding. Low mist hanging over the crest of a mountain, evergreen trees dotted around smooth berms and steep jumps, each one momentarily launching the rider into the sky before delivering them back onto the track. But trail riding is outside of many riders’ skillsets, and with no one to teach them the necessary skills, they’ll never learn. This is where companies like Alliance MTB, dedicated to teaching the public everything they need to conquer the trails, come in. I sat down with Alliance MTB creator Christopher James to talk about mountain bike training.

Can you give us a history of Alliance MTB?
We started roughly three years ago. Two of my good friends and I had ridden for a few years; we had a couple of experiences being coached by a mountain bike instructor. Some were very good, and some were terrible. It was after a particularly awful experience that I turned round and said: “We could do way better than this. We could do something that really works for people.” Eventually we decided to go for it, and we called ourselves Alliance MTB.

How did you go about setting the business up?
It was a quite slow burn really. We took advantage of links with friends who managed businesses. I had a friend who was a website builder, and a friend who was into marketing; they let me pick their brains. We started by building the website and advertising at the local trails centre. It grew from there. We really took advantage of social media. Being able to communicate with people has always been the backbone of our business. I think the vast majority of our subsequent bookings have been people recommending us to friends. Word of mouth has been a huge factor in our success thus far.

How has it been received by customers?
Our business is primarily seasonal, so we see real peaks and ebbs in regards to bookings. Interestingly enough, in the summer it tends to go quieter, as people take family holidays and casual riding picks up. We’ve received some amazing feedback, and it usually involves the structure of our courses. With most other trainers, people are encouraged to come to sessions in a group, and people tend to find that they don’t get what they want out of those sessions because they move too quickly or too slowly. We don’t have a formulaic process; we deal with one person at a time and make sure we’re moving at his or her speed.

How does the service operate in the winter months?
More people want to ride through the winter months these days, and I don’t know why that is. I think maybe trail centres are being developed with better engineering. Also, equipment has gotten a lot cheaper. High-quality kit isn’t extortionate anymore meaning people who may otherwise be put off by high costs are now able to take part. People are realising that the technology will keep up with what they want to do.

Exactly how many people do you employ?
At the moment we’ve got four guys on staff up here, and we’re looking to expand into the south of England next year. We’ve got two chaps who we’re working with down there who want to get involved with the company. I’m very protective of what we do, we have a set way of doing things. We want to protect the quality and make sure people fit with us, so we’re not keen to expand too far with people we don’t know.

What does the business involve on a daily basis?
Our first priority is getting to know the person, so that happens over social media and e-mail at first. We then send out questionnaires to our riders so they can tell us a bit about their riding. Then when they come to see us we initially assess their skills for ourselves. We like to take people back to the basics; we try to debunk some of the myths we pick up when we’re younger and get people riding correctly. Then we work on the areas in which they want to improve. It’s as much about mindset and changing people’s perceptions as it is about training.

What is the demographic of people who come to you?
It’s really interesting when we look back over the people we’re in touch with, or the people that we generally attract. We do see more frequently that it’s people over the age of 30; we see men slightly more often, and it tends to be people who are driven and believe in improving themselves. Those are the people who really get the bug. Something that I believe has had a big impact on mountain bike culture and trail riding is things like Red Bull TV and trail videos on YouTube, because they portray downhill riding as a real adventure – people see that and want a part of it.

Would you say that communication is the key in your sessions?
Definitely. In actual fact, I think for some people it’s actually extremely therapeutic. We have people come and see us who have some severe mental health issues. Because of the kind of people that we are and what we’re trying to achieve, people talk to us about it. We’ve had people who have depression, and who feel that cycling is productive; being able to help them is exactly why we wanted to do this in the first place. If they can come here and be successful and unlock that potential in themselves, there’s no reason why they can’t do that in the rest of their lives too.

Do you see services like this as an essential part of driving the industry forward?
Services such as ours drive the industry in a number of important ways. If you look at trail centers that offer coaching, it definitely adds to a healthy portfolio. In terms of what the industry is doing and how we’re moving forward, I think diversifying through creative businesses is essential. If people are riding their equipment properly, then they are going to make better choices and be better cyclists in general, and an industry of well-informed, skilled cyclists can only lead to good things.

Share
Previous Everything you need to know about e-bike legislation
Next November issue of BikeBiz now available for viewing!