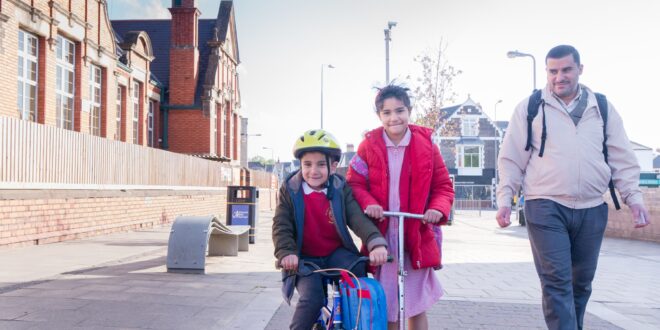 City Hall has launched an air quality monitoring project to give the “most accurate indication yet” of the benefits of School Streets.

TfL has funded 430 new School Streets – where roads surrounding schools are closed to motor traffic at drop-off and pick-up times – across London through its Streetspace plan to help avoid a car-led recovery from COVID-19.

To measure the air quality benefits of the new School Streets, 30 cutting-edge sensors which record nitrogen dioxide levels are being installed at 18 primary schools across Brent, Enfield and Lambeth. Half of these schools have recently introduced a School Street, so it will be possible to measure their air quality improvements and compare them to schools with roads open to motor traffic.

Meanwhile, surveys will try to measure behaviour changes as a result of new School Streets, such as reduced car use and increased walking, cycling and scooting.

TfL data from 2018 showed the school run made up a quarter of weekday morning traffic, with the average school journey being less than one kilometre. By providing funding for boroughs to introduce more School Streets, it will improve road safety and encourage more families to switch to walking, cycling or scooting.

The study – which is the first of its scale and has been co-funded by the FIA Foundation, Bloomberg Philanthropies and the Greater London Authority – will add to the evidence base to support the introduction of School Streets across the UK and globally, and help build the case for making more of the temporary Schools Streets permanent.

Mayor of London Sadiq Khan said: “I’m delighted that we are launching our School Streets air quality monitoring project on Car Free Day. It is vital that we don’t throw away the improvements made to air quality during lockdown and the past few months with a damaging car-based recovery from this pandemic.

“The 430 new School Streets which have been funded as part of our world-leading Streetspace plan will play an important role in enabling parents and children to walk, cycle or scoot to and from school which has so many benefits, not least in improving air quality. Too many lives are already lost each year as a result of our city’s toxic air and the results of our monitoring study will show just how much of a difference reducing car journeys through School Streets makes.”

This year TfL has marked Car Free Day with a two-week online campaign. Londoners were encouraged to ‘reimagine’ their trips, pledge to go car-free and share their stories of walking and cycling using the hashtag #MyCarFreeTrip for the chance to win a range of prizes including a Brompton e-bike.

TfL is working closely with local boroughs to create space for walking and cycling across the city through the Streetspace for London plan to help people make car-free journeys. Since May, more than 60 kilometres of new or upgraded cycle routes have been delivered or are under construction, along with more than 20,000 square metres of extra pavement space.

More than 1,500 extra cycle parking spaces have also been installed across London, focused around busy areas like high streets and transport hubs to make local journeys to shops easier for people cycling.