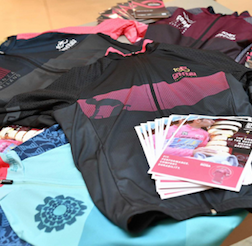 It has been announced that the partnership between Santini Cycle Wear and the Giro d’Italia – which started in 1993 – will continue this year.

Aside from the four leader jerseys, Santini is also launching a special capsule collection dedicated to the 2017 Giro and celebrating the milestone stages of the race, specifically Sardinia, the Apennine stage starting from Ponte a Ema in Florence, Rovetta-Bormio stage and Monza-Milan.

Santini has created an homage to the Maglia Nera jersey presented to the last-ranked rider in the classification until 1951. Coordinating shorts, cap, socks and gloves are also available for each of the jerseys in the same colours and graphics.

The jerseys for each of the four stages are slim fit and hug the body without restricting movement. The front and sides are made from a light and breathable fabric called Think Opaco, while stretch Cyber Rider is used for the back for comfort and freedom of movement. The sleeves are in raw-cut Bodyfit. A silicon elastic gripper around the bottom hem will stop the jersey riding up and help it hug the body during whilst riding.

The jersey dedicated to Sardinia – where the Giro starts – is in the colours of the Mediterranean Sea with a stylised traditional Sardinian lapwing interwoven with the swirling infinity symbol –selected as the logo for the Giro d’Italia’s centenary – on the back. Just above the lapwing are the names of the towns hosting the finish lines of the three Sardinian stages. The Sardinian connection influences the design of the jersey as a whole: the region’s flag is on the back, the sleeves are decorated with a pattern inspired by traditional Sardinian rug motifs and the collar features the “L’isola infinita”, Eternal Island, script.

The 11th Bartali stage, will see the cyclists tackle the Apennines starting from the Ponte a Ema in Forence, birthplace of Gino Bartali who won the Giro d’Italia three times and took the King of the Mountains jersey on seven occasions. However, the jersey not only celebrates the latter’s cycling achievements but also his resistance work in the Second World War. The Bartali name is emblazoned on the breast topped by mountains crafted out of letters as Gino Bartali secretly carried letters during the War. The back features the statement: ‘Il bene si fa ma non si dice. E certe medaglie si appendono all’anima, non alla giacca’ “You do good but you don’t talk about it. Some medals are pinned on the heart not the jacket.” The jersey is in yellow and blue, which were the colours that cropped up most frequently in Bartali’s career.

The third jersey celebrates the Stelvio, which this year is also “Cima Coppi”, Coppi Peak, a title bestowed each year on the highest peak in the race. The riders will tackle the climb to the top of the Stelvio Pass at 2,757 metres during the Rovetta-Bormio stage. The words W COPPI are emblazoned on the front of the jersey, as they appeared on the roads during the race. To pay homage to the champion, his nickname, ‘Il Grande’, The Great One, is on the inside collar. The swirling interlocking zeroes logo chosen to represent the 2017 Giro d’Italia’s ‘Amore Infinito’ slogan features on both sleeves while the words Bormia and Rovetta are sported on right and left respectively as these are the starts and finishes of the 16th stage.

The jersey dedicated to the Giro d’Italia’s final stage, which takes the riders from the Monza Circuit to the Duomo in Milan, borrows the pinks and golds used for the Maglia Rosa. The Duomo itself is in profile on the breast just above the words ‘Monza – Milano’ which also feature on the sleeves. The latter also sport the interlocking swirling zeroes logo chosen to represent the ‘Amore infinito’ slogan of this Centenary edition of the Giro d’Italia. The words ‘L’onda invincibile’, Invincible Wave, are featured on the back in a reference to the title of an article that appeared in the La Gazzetta dello Sport newspaper during the first edition of the race.

The Maglia Nera or Black Jersey completes the Santini Giro d’Italia capsule collection. This is a reference to the Maglia Nera awarded between 1946 and 1951 to the lowest ranked cyclist in the classification.