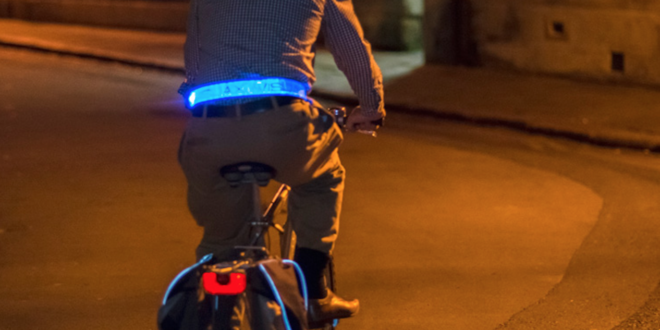 In 2011, fresh Cambridge graduate Andy Li identified a broad gap in the cycling market. Over the following year, the young entrepreneur developed, then prototyped, a jacket with integrated LED lights and turning indicators – the resultant product line is now known as Visijax.

Since the company’s inception Li has gone on to explore other opportunities, including pursuing further education, but remains associated with the parent company as a shareholder. In that time, the Visijax brand has really taken off, with the introduction of a number of new products and updates to the equipment that fuels them.

The commuter jackets have, meanwhile, undergone two evolutions. The fabric technology has been improved alongside electronics, though the wiring remains fundamentally unchanged from the first update.

“The main thing that’s really changed is the technology in the batteries – they’ve become lighter, and altogether better,” says Kevin Burton, national sales manager. “The LEDs have also been upgraded to a higher quality.”

The turn signals are patented, ensuring that Visijax have exclusive rights to that technology. “In terms of LEDs in jackets, many brands have a similar type of product. But what you’ll find is that they’re not hardwired into the jacket, whereas with ours, all you need to do is remove the rechargeable battery,” Burton expounds. “There are quite a few unique selling points, but the most obvious one is the turn signals. We’re seeing similar products, but nothing with lights integrated in a jacket.”

Although the idea is applicable across the board in outdoor industries, Burton tells me that Visijax is choosing to focus on cycling at the minute. “We’ve not really attacked what products we’ve got, yet. My appointment has been about cycling knowledge, and the sales side, of course. Now we want to establish our brand and promote the business to consumers.”

Commuters have been established as the target market, as opposed to more serious cyclists; the product isn’t aimed at the road market, and certainly not at mountain bikers. “It’s really designed for the 45-plus bracket who want to cycle more, but are worried about their safety. If you give somebody a waterproof jacket with integrated lighting, you also give them a sense of safety.”

This target market is relevant across all of Visijax’s operations, including distribution. “It’s important that we ensure anybody who’s involved the brand is onboard with what we’re trying to achieve. We’re never going to be a Gore-Tex equivalent – we’re a little bit more niche than that.”

Distribution is quite a simple process: the company remains very much involved, offering to interested parties what its representatives consider to be a good margin and price point. “It’s really a case of dividing up the areas to make sure that dealers have a protected network. We don’t necessarily work with all the shops in one area, because we don’t want to dilute their network.

“We go direct to retailers, but use various distribution angles across the world. For example, we’re currently looking for distribution in Germany. But it has to be the right partner. Like our retail network in the UK, it needs to be someone who understands what we’re trying to achieve. That’s a critical part of whatever we do. Whether we’re working with a retailer or distributor in another country, they have to ‘get’ what we stand for.”

The company is choosing its friends carefully, and while Burton is keen to spread its message, he’s intent that it’s on Visijax’s own terms. “What we’re looking for is partners – but the term ‘partner’ gets thrown around quite a lot in business. We’re particularly interested in working with retailers, but other areas of the industry as well, like working with brands, and bespoke products for companies. There are lots of different things, but the most important part is getting retailers onboard, and we just want to build the brand.

On the subject of events, Burton is tentative. “Getting involved in events would also be great, but these would need to be night rides. We want to partner with people on those lines – industry connections, industry leaders.”

With every intention of relocating manufacturing from Taiwan to the UK, Visijax has high hopes for the future. “We think we might have found someone we can work with, and are looking to explore that angle, because we’ll ultimately be cutting down on delivery costs. This would have a knock-on effect; the manufacturing in the UK is pretty much gone, nowadays.”

Although the company is growing now, Burton expects that in terms of staffing, it’s likely to stay small, with the senior management team remaining as-is. They are, nevertheless, in the process of recruiting an agent for the southwest, Northern Ireland, and also several agents in Scotland and the north of England.

“We need to support retailers, and I can’t physically get to all of them. We’ll also be recruiting at some stage in the coming few months for someone to look at our marketing. At the moment, we’re all trying to take lots of different angles on the job. Social media is so important these days!”

Burton keeps schtum when I ask what’s next, but assures me that it’s tremendously exciting. “Something I’ve seen in the last couple of weeks has been in the works for quite a while. It will make so much sense once we get it to market, but it certainly won’t be for this season. We’ve got a lot of testing to go through before the item’s actually ready, and a bit of feedback to gain.”

With a team of engineers “constantly developing new technologies,” Visijax is confident that whatever’s in the pipeline will make a very real impact.

Share
Previous Catching up with Peter Kimberley, MD of Cycle Republic
Next Everything you need to know about e-bike legislation