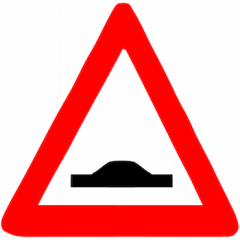 The Government is to pay local councils to rip out speed bumps, a measure which road safety organisations say will lead to deaths and a reduction in walking and cycling. The plans, leaked last year and now confirmed by the Department for the Environment, are said to be a way of tackling air pollution because motorists accelerate after being slowed down by speed-reduction measures and this acceleration leads to more emissions. Living Streets, Campaign for Better Transport and Cycling UK have written a joint protest letter to Environment Secretary Michael Gove.

The Government is basing its plans to rip out speed cushions on guidance from the National Institute for Clinical Excellence (NICE). In fact, this is a mistaken interpreation of NICE’s guidance and is more in line with the mainstream media’s twisting of NICE’s words. Earlier this year BikeBiz reported on what NICE actually said.

The majority of the mainstream press reported – falsely – that NICE was lobbying to get speed bumps removed. In fact, Britain’s health watchdog had issued air-pollution guidance, urging local authorities to introduce cycleways as well as measures that will make motorists drive slower and more smoothly.

In a report, NICE said:

"Where physical measures are needed to reduce speed, such as humps and bumps, ensure they are designed to minimise sharp decelerations and consequent accelerations." It also said that "evidence on traffic-calming measures such as speed bumps suggested that these may increase emissions by adding to decelerations and accelerations" but that "evidence from area-wide schemes does not show increases. So where physical measures are needed to reduce road injuries they should be designed to minimise their impact on air pollution. The evidence was weak so this was a ‘consider’ recommendation.”

The NICE guidance set out a strategic range of evidence-based practical measures to encourage low or zero emissions transport, including encouraging employers to incentivise their staff to cycle to work. NICE also recommended that local authorities should provide more cycleways.

A NICE representive has told the BBC that the Government was ignoring its actual advice. Dr Adrian Davis, visiting professor of health and transport at the University of the West of England, saids: "The fact is, numerous studies had shown that unless drivers are forced to slow down by physical obstacles like road humps they will continue to drive too fast in residential areas."

"However, they said they’d rather councils removed speed humps instead. Far from reducing the annual death toll due to pollution, that would merely increase the numbers of people killed by speeding instead."

He added: "Do we really need yet another court case before ministers heed the advice of their experts?"