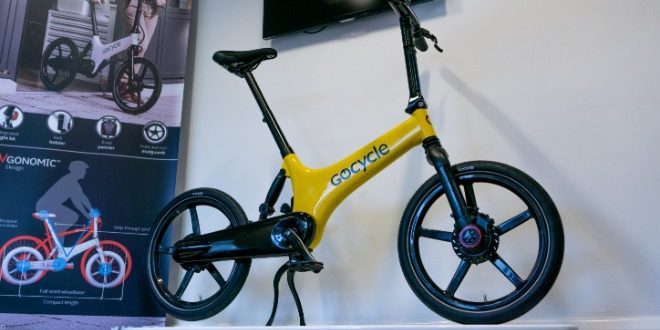 Riding the wave of e-mobility

The e-bike industry has grown substantially over the last few years, with major retailers experiencing a doubling in sales year-on-year over the past three years. A recent survey, on behalf of Shimano, of 1,000 people in the UK, found that 34% would choose an e-bike over public transport.

This huge growth in the market has been hard to miss – particularly with events such as the eBike Summit in 2019 discussing any barriers involved and what the industry can do to overcome them. The summit will return to Oxford in September (postponed due to COVID-19) and also this year we’ll see the first London e-Bike Festival come to Battersea Evolution, launched by the organisers of the Cycle Show.

One exhibitor will be Gocycle, based in Chessington, which enjoyed its best-ever year in 2019 with the launch of the fast-folding GX driving significant growth globally. The company finished the year with 26% growth in terms of volume year-on-year. It has ambitious plans to grow further in 2020, with the launch of the new fast-folding GXi, and has increased its global sales and support team by 40% in the last three months. 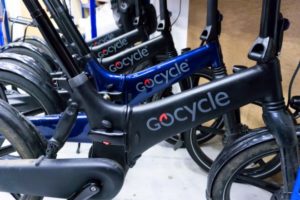 Looking forward
So with the company’s own growth, and the rising e-bike market, what should we expect as we enter a new decade? “It’s a very strong category,” says Richard Thorpe, designer and founder of Gocycle. “If you look at the US market, as an indicator of broader adoption of e-bikes, within the last year or two it has picked up very strongly. It’s now our third top market: Germany, the UK and then the US.

“I’ve always looked at the US as being about five years behind the UK, but I think it’s coming on much faster than that. And I think that’s an indication that the broader global adoption e-bikes is there.” Thorpe also thinks the UK is going to be a very strong market: “I’ve been commuting on a Gocycle for 15 to 20 years, and just this year I’ve seen a ten times increase in the number of e-bikes that I pass on my commute.

“We’re not directly in the heart of the city. You think e-bikes are everywhere, but they’re still very underexposed. In the last six months, I’ve seen a number of the e-scooters cruising by, so it’s a very exciting time. Any retailer out there that is still on the fence has got come off and get into e-bikes. They need to take a wide portfolio approach.”

Thorpe says that a strong increase in the e-road category was seen last year’s Eurobike. “I think the industry has thought that road cyclists will never put a motor on their bikes,” he says. “It’s happened because people want to ride together socially for longer and go further, and electric motors enable people to do that. So there’s a huge number of e-road bikes coming onto the market, and I would say the bulk of the market is that e-mountain bike segment.

“Then within the urban segment, you’ve got the traditional urban electric bikes, and then you’ve got this very interesting e-folding category, which we are pretty much leading at this time. Any retailer out there that’s thinking about getting into e-bikes, do it now. They need to stack their store out probably with 70% minimum, that’s what is needed to really get everyone in the shop committed to it.”

Folding category
Gocycle has focused on folding bikes from the beginning, which has been partly due to Thorpe’s own experiences. “I left McLaren cars in 2002 to start the company,” he explains. “I lived in a one-bedroom flat in London and I had two big wheel traditional bikes stolen. I had them locked in underground parking with CCTV cameras.

“And so when I developed Gocycle, I was always looking at a product that I would have the ultimate confidence and security of having it inside my flat or office. That’s why all the Gocycle is clean – it’s designed to be taken inside. Every Gocycle from the beginning has been a portable product that you can store inside.” 2019 marked the tenth anniversary of the launch of Gocycle’s first production model, the G1. The G1 became the first injection-moulded magnesium alloy bicycle in history and set the core Gocycle values of “stylish design, desirability, no-compromises approach and pioneering spirit”.

Thorpe says the shift in the company and the product portfolio recently is its movement into the ‘fast-folding’ category – its GX is capable of being folded and stowed in under ten seconds, therefore can be taken on a train or into an office easily. The battery is fully integrated into the GX’s frame for ease of travel and can be removed for charging or maintenance if required.

“Traditional urban electric bikes that are designed for the city, that don’t fold, to me are a compromise,” Thorpe continues. “That’s why Gocycle folds, whether it’s for theft or just the convenience of having it with you. It just opens up a whole new aspect to living with the bicycle.”

The health benefits of riding a bike are widely known, and these still apply to e-bikes as they encourage some to take up exercise. “The health aspect is great, because you’re living a more active lifestyle. But with my background and my interest as an engineer coming from McLaren cars and motor racing industry, I learned and honed a craft of developing lightweight structures. And that’s what’s applied to Gocycle, the DNA of the product has come from that industry.” 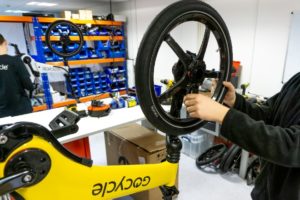 E-bike miles
Gocycle is also aiming to increase incentives in order to encourage people to ride e-bikes. The company is paying its employees for commuting to work by e-bike, in a scheme that was announced at the e-Bike Summit in Oxford in April of last year.

“It’s a really exciting programme. Having commuted on e-bikes for so long, I went through a period where, about two years ago, you’re competing in the rain, and it’s really windy or cold. Or you’re out there and looking around and everyone’s talking about ‘you need to get on a bike’, and ‘you need to do something more healthy and sustainable’. Most people are in cars and you’re out there on your bicycle.

“I felt like I needed to personally do something more. I founded a company with a mission to both build the best urban electric bike on the planet, but also to help people make better choices and live a more healthy and sustainable lifestyle. So what can I do as a director of a company? I thought we need to start paying people to make those choices. And that’s where e-bike miles came from.”

It’s set at 40p a mile, which Thorpe says is about what people get paid for a car. The reason for this was that he felt there should be parity between riding and driving. “It shouldn’t be that the e-bike is less worthwhile than a car per mile,” he says. “In fact, most research shows that cars cost society more money per mile than other forms of sustainable transport.

“I think we’re still the only company in the UK that’s doing it. Our message is not necessarily, ‘let’s go and lobby the Government’, but if you’re a small company, you can just make a decision right now today to do something about global warming. Hopefully, there will be more companies that will do things like that. And then the Government can look at it and maybe give us tax credits or something for all the miles travelled. I think there’s a lot of finger-pointing that goes on. And I just decided that we’re going to do something ourselves.”

Get off the fence
Thorpe says it’s a crucial time for the market and for UK dealers, to get off the fence and get into e-bikes. “We are one of the leaders in a very exciting category within that urban electric spectrum.

“We have a no-compromise product that rides brilliantly, but you have the freedom of that folding to be able to take it into your office. We’re a British company here and we do a lot more than just import products. We design and develop our own products here, and we test them here. We’ve even made them in the UK.”