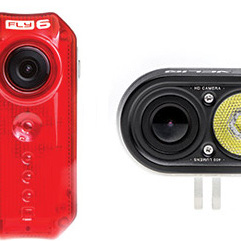 Ride with a bikecam, advises police officer and cycling coach

Russell Kelf is a police officer and British Cycling level 3 road and time trial coach. In the article below he explains the steps cyclists should take to secure and submit evidence should they become involved in a road traffic incident. Ideally, he says, cyclists should ride with cameras, preferably front- and rear-facing ones that can embed ride statistics.

Securing evidence
The “close pass initiative” launched last year by the West Midlands Police Traffic Unit has been, rightly, making headlines in the cycling press and the mainstream media. And, clearly, drivers are sitting up and taking notice: since the operation began in 2016 there have been more than 350 prosecutions for close passes, and encouragingly there been a 20 percent reduction in cyclists killed or seriously injured.

Not every road is going to have a police officer measuring passing distances so what can cyclists do to secure and preserve good evidence against poor or dangerous driving?

Before we go any further, I’m not here to tell you all how to ride, that as a police officer I’m taking sides, or anything like that. What I want to do is explain what the Crown Prosecution Service and the police would require from you, should you encounter poor driving.

Here’s a quick recap on how the judicial system works. First, you as the IP (“injured party”) make the complaint to the police. You inform us of what has happened, and we decide if a criminal offence has occurred. If traffic laws have been broken, one of two things can happen. We take a statement, or in some forces, you fill in a bad driving report. From your statement we complete follow-up enquiries, such as witness statements, CCTV footage, forensics and so on.

An offender is then hopefully located. (Some people have false plates, don’t register or insure their cars, all of which which makes it almost impossible to trace some vehicles.) If an offender is located then on most occasions, and depending on the severity of the offence and when it occurred, they are either arrested or voluntarily interviewed.(Since the government’s introduction of the “necessity test” it’s become harder to arrest alleged offenders.)

Depending on the severity of the offence, a police sergeant can make the decision if it the case is to be taken further – you have to bear in mind that proving a one-on-one allegation with no witnesses, CCTV etc can be hard (a jury has to make a majority decision; if it’s one-against-one case juries are reluctant to commit). Once a sergeant has made a decision, it’s either charge the offender to court, or in more severe cases, the evidence is sent to the Crown Prosecution Service. Ultimately the CPS will make the decision to charge to court or take no further action.

There are plenty of clips on Youtube of scary near passes, bad driving and road rage. There are also heated exchanges – peppered with expletives – between cyclists and drivers. If you’re involved in such an incident, step back and think what a video of any exchange would look like when played back in court. Don’t rise to any bait. Refrain from shouting back at the driver, questioning his or her parentage,arms flailing all over the place. Let the driver shout out until they are out of puff, get back in their vehicle and leave.

If the driver pulls over, and gets out, think of your own safety. If you can get away then do so. If not, keep the bike between yourself and the driver. Remember just how unstable you are on the bike, and in any cleated shoes you may be wearing. Staying calm isn’t just a wise move there and then, it’s also good for your frame of mind when collecting on-the-spot evidence.

Be the best witness you can be. When giving a statement to the police, you will be asked certain questions. Some obvious, some not so obvious.

Time, day, and date – Check your watch. Get an accurate time of when it happened. If you give the wrong time, or even day, it gives the offender a chance at an alibi. Smartphones are your friend.

Conditions – note down the weather, the hours of darkness or daylight. Was the road damp, had it been raining? If sunny, where was the sun in the sky? Was it low in comparison to the road?

Distance and timing – How long did the incident last for? This is from the moment you spot the alleged offender, to the point you lost sight of them. What was the closest point you saw the offender, In person and in their vehicle? This could be at the point of contact. What was the furthest point? Whilst it is advantageous to state distance in metres, yards, feet or inches, car lengths, bike lengths can also be used.

View – Did you have a good, clear and unobstructed view? If you wear glasses, did you have them on? These matters could be raised in court. Mugshot – note the driver’s ethnicity, height, build, complexion, characteristics, hair colour, hair length. Did he or she have any facial hair, tattoos, scars, marks, piercings? Were they wearing distinctive clothing or jewelry (note styles, colours, emblems, motifs, writing, collars and so on).
Vehicle – As a bare minimum you’ll need to have noted the vehicle’s registration number, but even better if you can note the make, model, colour, registration plate, stickers, number of doors, dents, extras (roof rack, bars, spot lights), and number of occupants. The driver at the time of the offence can be ascertained by the police.

Witnesses – If you’re cycling with others when the incident happens try not to discuss the incident or events too much. Other people may interpret things differently. Sometimes by discussing with others, it may put doubt in their heads. They may feel that something is not important, and omit it from their statement to the police. If there are other witnesses around get their names, addresses, phone numbers, and the registration plates of vehicles they are in.

A lot of drivers now have onboard dashcams. This can be a great piece of evidence but let the police seize the memory cards – any interference from you could render the memory card non-admissible in court. Naturally, some of the most compelling evidence could come from any bikecams you may ride with. Front- and rear-facing cameras will capture fore and aft footage; 360-degree cameras capture the full scene. If you are cycling in a group any rider with a front-facing camera should ride at the front; let the tail-ender carry a rear-facing camera.

Many of the police forces which stage “close pass” operations use Cycliq front-and-rear cameras. These have the clear and obvious benefit of displaying passing distances. However, even with the best cameras in the world you still have to follow some simple rules: