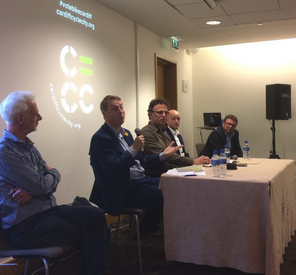 All four political parties that attended the special hustings arranged by Cardiff Cycle City agreed that Cardiff needs more people choosing to cycle rather than drive.

Conservative, Green, Lib Dem and Labour parties all sent representatives to the packed debate room at the Millennium Centre on Tuesday, April 4th; over sixty members of the public attended the event to question the politicians on how they plan to improve cycling in the city.

All parties praised cycling for its health and environmental benefits and all discussed the prospects of doing more to make Cardiff one of the top UK cities for cycling.

Cyclists in the audience demanded action on making Cardiff safer for bicycle use by providing and maintaining better cycle lanes and taking action to reduce vehicle speeds, with many commenting that this was a key issue for less advanced riders. Concern was also expressed that the current lack of safe routes around the city. Many agreed that this is a major barrier for getting more women cycling and generally making the bicycle a normal everyday means of transport.

There was general consensus that air quality was a growing problem for Cardiff and that increasing cycling was a key part of the solution. The main message from the event was that cycling is now a key issue for politics in the city; attendees made it clear that cyclists will be using their votes to increase awareness around these key issues to raise the profile of local cycling for the greater community.