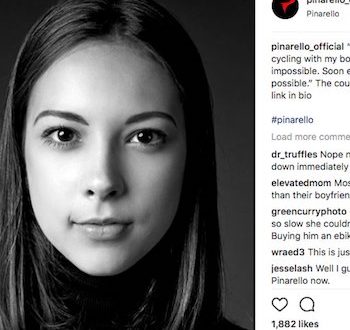 Yesterday’s social-media promotion of a new e-bike from Pinarello didn’t go too well. Two Instagram postings were deleted today, the company’s Twitter account was deleted and the story even made it on to BBC.co.uk

Thanks to two Instagram postings the Italian manufacturer was accused of both sexism and ageism.

Pinarello said its new carbon road e-bike was aimed at weekend riders and female riders who want to "follow easily the men’s pace."

Pinarello launched their carbon fibre e-bike today, and the internet is not loving their marketing. Neither are we: https://t.co/6uPR66yiQH pic.twitter.com/RNzTsfRr6g

One of the postings featured a woman claiming she wanted to go cycling with her boyfriend but to keep up with him "seemed impossible."

In its second posting, a 55-year-old man said he didn’t have the "time to work out" but wouldn’t miss a "Sunday ride with my friends."

Both postings attracted criticism on social media, with the brand being slammed with the hashtag #pinarellNO.

Pinarello is the official bike supplier of Team Sky.