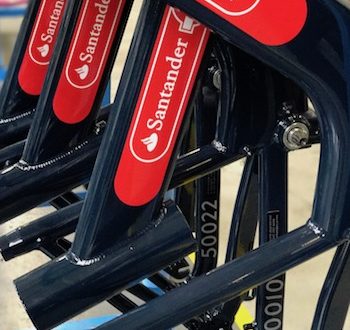 The new Santander Cycles public hire bike, unveiled in London this morning, is a big improvement on previous models. It feels quicker, slicker and features 24-inch wheels instead of the existing 26-inch wheels – this is said to improve the bike’s acceleration from a standing start. The bike is assembled in Stratford-upon-Avon by Pashley. The bike’s aluminium frames are shipped in from Asia, and some are given a polyester coating and top lacquer in the Pashley paint-shop.

BikeBiz was given an exclusive first look – and first ride – on the "Prospect" bicycle. Audio of this ride, and a Pashley factory tour with general manager Steven Bell can be heard on the Spokesmen podcast, published today.

Pashley is patenting the bike’s headstock (existing "Boris bikes" suffer from wobbly front-ends because of problems with the current headstock).

The new lighting system is better positioned, brighter and more effective, says Pashley. The new rear mudguard (longer and deeper than the old one) also features a brake-light which comes on when the new Shimano drum brakes are activated.

The 24-inch wheels are shod with new-style lower-profile tyres with an Aramid belt and a 4mm internal puncture protection layer. (Pic above shows the new Sadiq Cycle next to the old Boris Bike.)

The new bike has a signature new "sound" because of the new wheels and the slimmer tyres. Saddle adjustment is now much simpler with a new one-handed seat clamp.

And the new bike also features an accelerometer and Bluetooth-connectivity to help Serco service the bikes. (Serco is calling the digital additions "CyTek".)

Pashley was founded in 1926 by William ‘Rath’ Pashley. The company’s factory is in Stratford-upon-Avon, Warwickshire, Shakespeare’s birthplace. The firm employs 53 people. While the new frame is currentnly shipped in from Asia, Bell said Pashley will be evaluating whether the alloy frame can be made in the UK at some point in the future. Pashley currently hand-builds a large range of cycles, including traditional bicycles and tricycles for the consumer market as well as workbikes.

The firm makes 10,000 bikes a year. Its welders are capable of fabricating aluminium frames, but the firm would have to invest in T46 frame welding facilities, a rarity in the UK.

The Pashley-assembled Sadiq Cycles will slowly replace the existing Boris Bikes (the hire bike scheme was actually commissioned by London’s first Mayor, Ken Livingstone). The original bikes, made by Bixi of Montreal, have a ten-year lifespan, with some needing to be taken out of service before that shelf-life is up.

A stunning morning welcomed our first hires of the new bike just after 9am by @willnorman and Keith Moor of @santanderuk pic.twitter.com/pUTy4uyACw