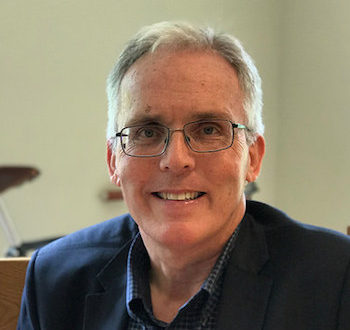 London’s Mayor Sadiq Khan has still not scheduled the unveiling day for the “5000” series of hire bikes you’ll soon see in the nation’s capital. They’re being supplied by Pashley, and I rode one (they’re a huge improvement over the existing bikes), and was given the full back-story by Pashley MD Steven Bell. Look out for that breaking story on BikeBiz.com some time soon.

Meanwhile, I also got to spend time with Pashley CEO Adrian Williams. He says “lovely” lots. Which is lovely. Here he is in his own words. You can also listen to this interview on The Spokesmen podcast.

“I’m an aeronautical engineer by degree – I did my apprenticeship with Westland, [working on] remotely piloted helicopters. I then moved on to commercial side, and progressed to a high level.

“But I wanted to run my own business. [To learn the ropes] I joined a small aerospace engineering firm in Bath. By the age of 35 I was deputy managing director, and the group that the business belonged to had ambitions for me, but I didn’t want to be involved in aerospace or defence so I formed my own marketing company.

“At this time [early 1990s] a sculptor friend of mine asked me if I’d ever [cycled] the Bath to Bristol cycle route. No, I said, I haven’t got a bike at the moment. He said I needed to get out more.

“[My marketing company] was representing a French company making helicopter deck-landing equipment. I went out to the Paris air show and got gridlocked on the Périphérique [the M25 of Paris] and just thought this is ridiculous, we cannot go on like this. This is a motorist thinking, not a cyclist.

“The group my company worked for had a subsidiary company that made gears and had worked on the parts for an electrically assisted bicycles a few years previously. When I asked a supplier about batteries he said ‘do you mean for the Sinclair bike?’ This intrigued me …”

[Sir Clive Sinclair was working on a small-wheel electric bike at the time, was became the Zike. It was launched in March 1992 at the Cyclex exhibition in Olympia, London. It cost £499, with plans to sell 10,000 per month – the Zike was discontinued after just 2000 were sold in total.] [At about this time] my sculptor friend came to the door with a bicycle and said try the Sustrans route.

“So I dropped down the hill in Bath, where I lived, and went towards Bristol. Everything in my life then slowed down, people were waving, the May blossom was out, people were smiling – it was all so lovely.

“Then I went back via a hill, and thought ‘Bugger this!’ I had in the back of my mind electric-assist for bicycles. I decided this was something I’d like to be involved in, and could be the future.

“I formed a little company in a converted chicken-shed near Bath, and employed an engineer and a designer and we got some Hawk bicycles and we motor-assisted them. The drive went on the front fork.

“I found out where Sir Clive Sinclair was launching [his Zike] so we decided we would go up to Cyclex and cycle around outside when he launched inside. A Sky television crew saw us, and took some footage. Some broadsheets came across and took photos. The media went into the Sinclair launch, said it was strange machine, and also covered our machine, which looked normal. The next day all hell broke loose. One person turned up at our converted chicken sheds, a quarter of a mile from Marshfield, and said he wanted to buy the bike. He had come from Birmingham by train to Bristol, by bus to Marshfield and walked to us – he took out £1000 in cash and said he’d been looking for something like this for ages.

“Pashley phoned up and said they were interested in the technology. I started talking to them about a licence agreement, but then everything went quiet. Later I happened to be passing Stratford upon Avon and was met by the operations manager who told me there were one or two difficulties at the company – they had bought another company – Spencer mudguards – this had been ill advised, the company was debt burdened. Mountain biking was all the rage in 1993 and the bank wasn’t interested in a mudguard company.

“So I said would you like me to help? I came on board four days a week and the operations manager went down to run Spencers. Within six months of being here I could see that demand for Pashley products was strong – the phones were ringing; people who had bought fleet bikes five years previously came back for more, and when I asked a brazer or welder if they’d mind helping out somewhere else in the factory they said “yes, that’s OK” – there was a lovely Midlands propensity to work.

“Banks were not interested [in a Midlands manufacturer of bicycles]. This was at a time when nobody was interested in UK manufacturing – everybody was off-shoring. I hated that.

“Everybody was short-term minded. I could see the Pashley family wasn’t terribly interested in [the company] so I said ‘how about we do a management buy-out?’ And they said, ‘well, if you think you can.’”

“Pashley had been helping Royal Mail improve their bicycle, the RM92 Millennium, and we made it more robust. In due course we saw [posties] needed to carry more load. We had been developing a step-through load carrier, the Pronto. Royal Mail ran a competition [in 1999] to find a load-carrying bike, and we entered and won. We called our Pronto the Mailstar. Soon 60 percent of our business was with the Royal Mail.

“We’ve always done traditional cycles. When William “Rath” Pashley started the company in 1926 he said ‘I’m not going into the volume side I’m going into the niches’. When people say we do retro bikes, I say ‘well, we’ve been doing retro bikes for 90 years.’

“[In the 1990s we had 300 products, which is incredible for a business with 50 people in it. We now have 160 products. Which is still amazing, really. We’re the last of the original makers.

“If I was a ruthless consultant that just wanted to maximise on profit maybe we wouldn’t make this lovely children’s Pickle tricycle or some of our other products, as they would be deemed unprofitable, but we have to continue in the tradition of making bicycles.

“The Guv’nor came about when we started to focus on our classic cycles. We made useful cycles, whether for industry or commerce or delivering things around the streets or for people riding on the streets – sensible bicycles, basically, which was unfashionable thinking at the time.

“I’ve got a small house at Wilmcote, three miles away, and next to the canal tow-path so I have a cycle to work route and I wanted a simple bike to cycle to work on. In my head I had this product, which became the Guv’nor – it’s a simple three-speed.

“The UK sales manager said I’m not putting that on my stand at London. So the first prototype was sent out to Interbike to see what the distributor over there thought about it. When we were building up the booth, the distributor saw the bike and said ‘that’s amazing’.

“We thought we maybe need to put it display. Soon after the show opened our distributor came up to us and said ‘would you mind having a word with your technical person because he’s saying it’s not available, and I’ve sold twenty of them already.’

“I said ‘what price are you using?’ He said ‘well the price you gave me.’

“‘But I made that price up,’ I said. ‘Well, they’re buying it,’ he replied. It launched itself really.

“There’s a certain style about it. Uncomplicated, and it has a certain aesthetic and beauty. It spawned the Guv’nor’s Assembly [a fan club].

“Pashley is driven more for the love of the product and those relationships than driving the bottom line. There is a soul here.

“We’ve got the last metal mudguard making machinery, which Spencer’s [a traditional mudguard maker] wanted moved out of the way so I purchased that. I’m going to get it up and running in the not-too-distant future. There are people [here at Pashley] that say ‘why are you doing that, we can get [mudguards made overseas] but they say that carefully … and I’m ignoring them.”

Pashley also now has a company shop, the Traditional Cycle Shop of Stratford upon Avon.

“We didn’t have an outlet in Stratford upon Avon,” said Williams, “but people wanted to see our product so we took on board the Traditional Cycle Shop, which was previously operated by Avon Boating Company. We took that on last year.

“We are routing customers into our dealers too. We are not trying to take custom away. I go in there on Saturday mornings, listening, observing, and trying to see what works in terms of display. That gets fed to our dealers, here and internationally.”

The shop is managed by Fran Martin, a former secondary school design and technology teacher. “I’m loving every minute of it,” he said. “Business is very good. We’ve just had a record month.”

The shop stocks the full range of Pashley products, as well as many Moulton’s. (There’s a £16,000 Moulton on the shop counter.) The Guv’nor is a steady seller, said Martin.

“Somebody will come in looking fairly normal and buy a Guv’nor and then when I see them for their six-week service they’re wearing tweed and waxing their mustache.”

Pashley was founded by William “Rath” Pashley in Birmingham in 1926. The company specialised in freight work-bikes. The company now makes about 10,000 cycles a year. Williams owns 73 percent of the company. Pashley will supply 500 bikes a year to Serco which operates the ‘Santander Cycles’ share-bike contract with Transport for London. The bike frames are made in Taiwan, but painted and assembled in Stratford upon Avon. One day (when the UK can make aluminium cycle frames) Williams is hoping to make them in the UK.