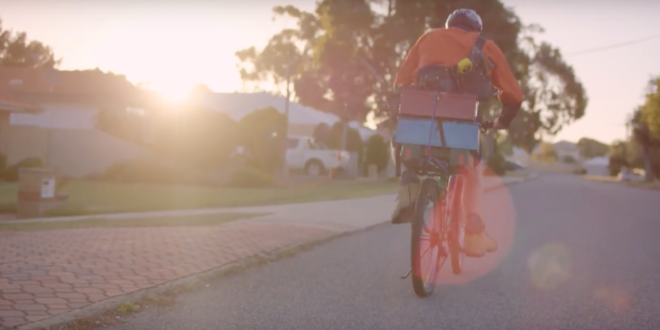 A series of cinematic TV adverts depicting cycling as slow, unsexy and socially inadequate have today been pulled by the road safety minister for Western Australia. BikeBiz put the campaign under the spotlight yesterday, and the video adverts have now been deleted from YouTube.

An Australian newspaper said the "campaign made news overseas, with UK cycling magazine BikeBiz making fun of the ads, calling them ‘jaw-droppingly bad’."

"I did not see them before they went live and as soon as concerns were raised with me, I acted swiftly to have them taken down," she told Western Australia Today.

The social media part of the campaign has also been erased from the Road Safety Commission’s website. Produced at some expense, the ads were planned as part of a seven-week campaign targeting young male drivers.

We Ride Australia’s Stephen Hodge said the commission had been crassly insensitive to air the adverts:

"We are incredibly disappointed with the content that portrays the choice to ride a bike as social suicide, ridiculous and the choice of no one if they have an option to drive a car," he said.

The campaign featured a young male motorist – Cam – who got caught speeding and lost his driving licence forcing him to go back to riding a slow rustbucket of a bicycle, his "childhood mode of transport." And because he was back on a bike he would probably lose his girlfriend because he was riding a "tiny little green bike."

"Speeding slows you down," was the campaign’s theme, portraying cycling as creaky, childish and deeply unfashionable.

In one of the ads Cam looked forlornly at his car as he set off for work on a rickety old bicycle. He was shown wobbling slowly along the road, dabbing his foot on the ground to steady himself.

In another video Cam was small in a huge expanse of outback, and rode painfully slowly across the screen, with creaking sound effects.

Cam’s girlfriend – punningly named for a German sportscar brand – cools on him when he turns up for a date on his dirty bicycle.

All of the video shorts ended with a black screen and the voiceover and text saying they were "authorised by the State Government Perth."

The videos are no longer available but for the styling and deep, male voiceover the cinematic ads looked and sounded like "Alternative Fuels”, a TV ad for Miller Lite produced by Errol Morris in 2003. However, while Western Australia’s "Speeding slows you down" campaign belittled cycling, Morris’ film is the world’s best ever ad featuring beer and a cyclist.