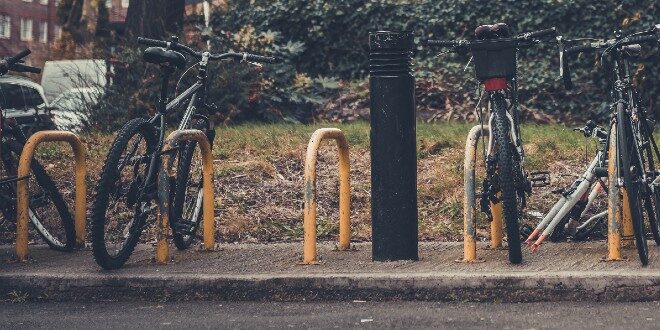 Police data has revealed which areas in London saw a surge in lockdown bike thefts last year, with just 1.1% of bike thefts resulting in the thief being caught.

Waltham Forest is the borough with the greatest increase at 30.88%, followed by Haringey (27.52%) and Southwark (23.92%). The data, collated by London criminal defence solicitors Lawtons, reveals statistics up to September 2020. 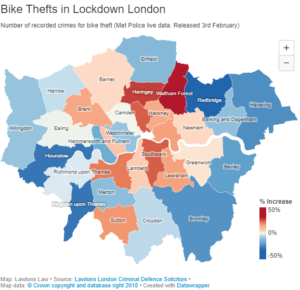 While some boroughs saw a rise in bike thefts, other areas that typically have higher rates for the crime experienced a fall – the borough of Westminster has had the highest rate of bike theft in previous years, though there was a 7.77% decrease last year. Redbridge saw bike theft fall by 30% and Hounslow by 27.21%.

The borough where you’re least likely to identify a bike thief and recover your stolen bike is Bexley, with just over a 0.65% chance of the thief being identified. This is followed by Harrow at 0.68%, and Bromley at 0.69%. The borough where you’re most likely to have your bike returned is Hackney, with 2.83% of bicycles found. Next highest is Westminster with 2.63%, followed by Tower Hamlets with 2.23%.

“Bike theft is definitely becoming more of a problem, and the numbers are a testament to this,” said Nick Titchener, criminal defence solicitor at London law firm Lawtons Solicitors. “Unfortunately, suspects aren’t being identified because there’s usually no relationship between themselves and the victim and it’s a relatively low-priority crime. On top of this, owners often don’t document the ownership of their bike, making it difficult to prosecute even if the perpetrator is caught.

“It’s essential that you document your bike to help you recover it in the case of theft. Keep your receipt, make a record of the serial number and register your bike with a bicycle marking and registration scheme. This will enable the police to trace your bike back to you if it is stolen and recovered.”

Chris Smith, MD at Pendle Bike Racks, added: “Hopefully you will have registered your bike with BikeRegister and placed a security mark on your bike. The mark serves as a visible deterrent because the owner of a marked bike can be traced and the odds of arrest/prosecution are significantly higher. It also makes the stolen bike much more difficult to sell. If you happen to find your freshly stolen bike on a social media marketplace, resist the urge to go vigilante! As tempting as it might be to bang down the door and take back what is rightfully yours, the police are there for a reason.

“Lock all parts of your bike (not just the frame) to a secure bike rack using a top-quality lock. We recommend looking for the ‘Sold Secure gold or diamond’ class locks. Also, make sure you check out the bike rack. Cunning thieves have been known to cut sections out of steel stands and cover the gaps with stickers – then pluck a locked bike away with consummate ease.

“If you can’t get your lock around them, remove all quick-release items from your bike and take them with you – for example your seat post, lights or your front wheel. Quick-release is a great system for the rider, but unfortunately, it is great for the thief as well.”