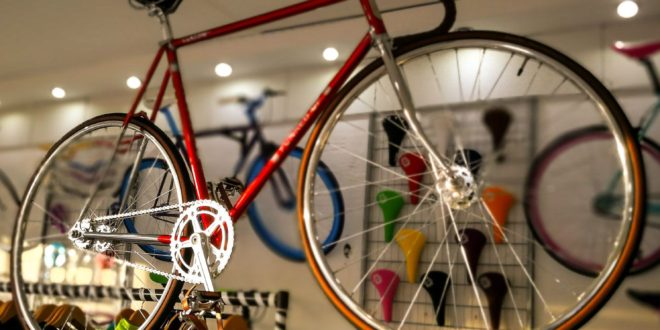 "It is unbelievable how the colours come to life when you can see the bikes in real life rather than them being muted on a screen," one customer told FunkedUp.com after visiting the online fixie retailer’s new physical store in Dublin. Another said "being able to touch and feel the bike in the shop has just taken your bikes to a new level."

The advantages of having a "real world" presence are growing on other previously online-only retailers, with the concept of "showrooming" – or opening bricks-and-mortar stores  – set to increase, believes property consultancy Colliers. In November the firm released research that claimed an increasing number of "pure play" online retailers would require touchy-feely stores.

Co-head EMEA retail at Colliers Paul Souber said: “With the rate of web sales forecast to level out over the next four years, many e-retailers have identified ‘showrooms’ as one of the remedies to a decline in profits.

“Increasingly showrooms in physical shopping environments which both generate online sales, raise awareness of their company, promote brand loyalty and offer the customer an opportunity to see, touch and feel the products."

Colliers’ head of forecasting and research Mark Charlton added: “The trend for pure-plays to take physical stores will undoubtedly accelerate as increased online competition and lower rates of sales growth requires them to find a competitive edge.”

FunkedUp has been trading online since 2011. The retailer’s real-world store is situated just off Dean Street, close to the centre of Dublin. It opened in mid-December.

The premises had been empty for a few months before FunkedUp took over; it had previously been occupied by a beauty saloon, and before that an antiques shop.

"It only took seven days from getting the keys to opening the doors," said FunkedUp’s founder Olaf O’Moore.

He added: "It turns out that bike mechanics can be surprisingly good at carpentry, electrics and coming up with innovative ideas about how to best hang wheels from the ceiling."

FunkedUp sells to the world online, but with fifty percent of customers located in Ireland it made sense to open a store in Dublin, said O’Moore.

“We keep a notebook in the shop to keep a track of requests and observations. We will take these insights to improve our web experience. Interacting and learning from our customers will help us define our next FunkedUp bicycles and other products.”

"Prices of the bikes, components and accessories are the same both online and in-store," he said.

"However, occasionally we will run promotions that may be only available for our online customers, and certain promotions that will be in-store only. We’re also stocking and trialling products in the store, which may then become available online as well."

FunkedUp’s online store sells pre-builds and also features a bespoke bike customiser, where there customer can choose frame colour, the components and the bike’s set-up.

This customiser is also available to customers in the new real-world store.

"We have a tablet in store and a desktop with a 27-inch screen so there is maximum convenience for our customers to be able to customise their bikes there and then," said O’Moore.

Share
Previous oBike’s departure from Oxford is a pause not an exit, says dockless firm
Next Wellingborough Cycles closes