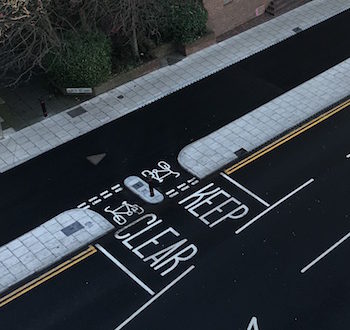 Another British city has opened a protected cycleway – this time it’s Newcastle upon Tyne. After months of construction the John Dobson Street cycleway has finally officially opened. Running parallel to Newcastle’s main shopping highway (Northumberland Street is the former A1 but which has been pedestrianised for some years) the cycleway cost £1.7m, and will be followed by links to other routes.

The new-look street features a separated two-way cycleway, with dedicated signals at junctions.

John Litherland, chair of the Newcastle Cycling Stakeholder Forum, said: “It’s great to see our first 21st century cycling infrastructure in the centre of Newcastle. With more investment like this cycling can become a major means of transport in Newcastle.”

The work has also seen pavements widened and improved crossing points for pedestrians.

Cllr Ged Bell, cabinet member for investment and development at Newcastle City Council, said: “The transformation of John Dobson Street is the first stage in our plans to make the city centre safer and more accessible for everyone.

“By changing how we use the area along John Dobson Street we have been able to free up space for people to walk and cycle in a safe and welcoming environment while also achieving improvements for people who use public transport and who drive."

He added: “Effective and efficient transport networks which enable people to travel easily in and around our city are crucial for supporting and developing a strong local economy in which businesses can thrive.

“And by improving our transport networks we are also improving the health of our city by reducing air pollution caused by congestion and by making it easier for people to choose more active ways to travel, such as walking or cycling.”

The work on John Dobson Street was funded through the Department for Transport’s Cycle City Ambition Fund. Sustrans was consulted on the route.

Neil Mitchell, head of delivery for Sustrans in the North of England, said: “We know from other cities where we work that more high quality paths like John Dobson Street, linking to routes on quieter streets, will really start to attract large numbers of people to cycling.

“This in turn helps to reduce traffic congestion and air pollution and improves health.”

Next year work will start on linking the new cycleway with the existing cycle route outside the Civic Centre which goes via Newcastle University through to Jesmond, a student hotspot.