Simon Barnes has announced, alongside Cherie Pridham, the launch of a fresh racing team to the UK road-racing scene.

Backed by Madison, IceBike was selected as the launch platform for Plowman Craven Madison – a team made up from a merged Pearl Izumi team – who are to stay on as clothing sponsors – and the Plowman Craven riders, as well as three other riders plucked from various race teams.

Madison has come on board as the main team sponsor, while Pridham takes on the role of team director, making her one of only two female managers in the sport in Europe.

“This is a great bunch of guys and it’s a dream come true for me to be working with them.” enthused Pridham. “I think there will be a few surprises as there is a lot of raw talent that Eddie can make the most of during the races.”

Introduced by Cyclevox MD, Anthony McCrossan, the team will be riding top-end Cervelos kitted out with the latest Dura-Ace groupsets. The team’s colours will be a highly recognisable blue and pink.

Team Owner and MD of Plowman Craven Simon Barnes said: “I’m impressed with the amount of talent we have for a relatively young squad. The guys rode with distinction at the Tour of Mallorca two weeks ago and we’ve been invited out to more races as a result.” 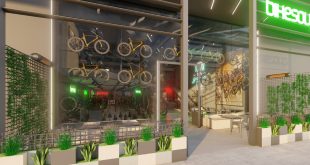 Bikesoup to open flagship store in Westfield next month

Bikesoup is to launch its flagship store in Westfield, London, in early November. Founded by …