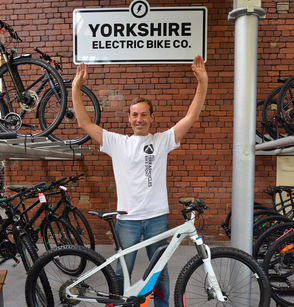 With showrooms in Shipley and Wetherby, the brand will supposedly offer one of the largest selections of branded electrically-assisted bikes in the region.

A division of long established bike retailer All Terrain Cycles, the new venture aims to tap into the growing popularity of pedal-assisted bikes in the UK with the market here expected to catch up with Europe where it is estimated that 30 per cent of new bikes are now electric.

Offering a choice of more that 50 e-bikes in-store from the leading names in the sector such as Cube, customers will also have the opportunity to test drive various models.

Managing director of Yorkshire Electric Bike Company Tony Booth explained: “People seem to be more open to the idea of electric bikes. Initially, they were seen as being aimed at older people, but they are now becoming ‘hip’ with much younger riders who want the thrill of some off road fun without the slog of ploughing up hills.

“There is still an element of exercise involved as you have to pedal in order for the motor to run, but it means you don’t have to be ultra-fit to go mountain biking with your friends and you have a little extra help if you’re recovering from an injury.

“Motorised bikes are environmentally-friendly and cost-effective which also makes them ideal for commuters or teenagers who want some independence. In fact, we’re finding that lots of motor cyclists are now turning to e-bikes.”

Tony continued: “Like many cycling purists, I was initially a little scathing about e-bikes – that was until I tried one myself! I am now a complete convert – quality, branded electric bikes offer all the performance benefits you would expect from today’s pedal bikes, but the extra power boost makes them even more fun and gives the rider more options. While the UK has been slower than Europe to embrace e–cycling, the experts are predicting that the craze will soon take hold here too and I fully expect to see a surge in demand over the next year.”