The scheme, which adds an extra four kilometres of segregated routes to Leeds’ growing cycling network, has been delivered through the West Yorkshire Combined Authority’s CityConnect programme, aimed at encouraging more people to travel by bike or on foot, in partnership with Leeds City Council.

New sections of segregated cycle route connect the existing sections of the 23 kilometre Leeds Bradford Cycle Superhighway to the east and west of the city, making it safer, easier and quicker to travel by bike in Leeds city centre. The new cycle superhighway runs along Wellington Street towards City Square from the west and along Marsh Lane, York Street, Duke Street and Kirkgate from the east.

Groves said: “I’m delighted this important scheme has been completed in partnership with Leeds City Council. These new sections of cycle superhighway provide an important missing link in Leeds’s cycling network, making it safer, easier and quicker to travel by bike in the city centre.

“We know encouraging more of us to travel by bike or on foot not only boosts people’s health and saves individual’s money, but it also brings wider environmental and economic benefits, which is why we want to make cycling and walking a natural choice for short, everyday journeys.”

Mulherin added: “Through the council’s ‘Cycling Starts Here’ strategy, Leeds has set out an ambitious cycling plan which includes more cycle routes segregated from traffic. The city now has 148 kilometres (over 95 miles) of cycle network. Not only will these additional segregated cycle routes improve the experience for the thousands of cyclists who use them every day, but we also hope they will encourage more people to try cycling into the city and leave their cars at home.

“Having declared a Climate Emergency, it’s more important than ever that we reduce emissions which impact on health and decrease unnecessary car journeys into the city. For those choosing not to drive, we want to make access by bike a more attractive, safer and healthier experience.”

Emily Ingham, principal transport planner at Fore Consulting, is the travel plan coordinator for Wellington Place, which is one of CityConnect’s Bike Friendly Businesses. She said: “Cycling rates increase where there are routes segregated from traffic, so it’s fantastic to see the latest sections of cycle superhighways completed.

“These new routes will especially benefit people who are not confident cycling on roads, making cycling more appealing to more people. We already have good rates of cycling at Wellington Place thanks to our location close to the canal towpath, and the opening of these new sections of route, linking existing infrastructure, will hopefully boost these numbers even further.” 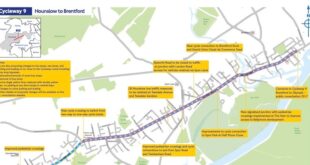