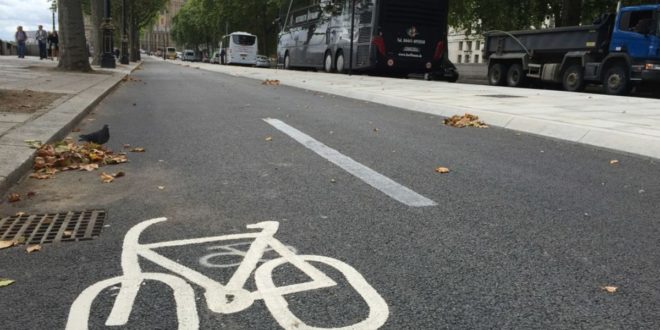 National Infrastructure Assessment does not call for cycleways for all

The Commission – which is an arms-length part of the Treasury – is also strong on recycling, renewable energy and reducing the reliance on nuclear energy.

However, active-travel campaigners will be disappointed there is not more in the report on cycling and walking.

One bright spot – for certain cities at least – is the recommendation to encourage the recently appointed "metro mayors". In Greater Manchester, mayor Andy Burnham appointed Chris Boardman as his walking and cycling commissioner, and the Olympian recently unveiled ambitious plans for the "Beeline" network of cycleways and footways.

The National Infrastructure Assessment’s spending plans include funding for Crossrail 2 in London, and Northern Powerhouse Rail linking the major northern cities, and it also recommends a boost in funding for key cities totalling £43 billion to 2040, with cities given stable five-year budgets.

The Assessment also calls for roads to "built for the future" and that means more infrastructure for electric cars, and planning for driverless cars. This is something the government is planning to do anyway, as shown with yesterday’s Road to Zero report from the Department for Transport. While cycling is always treated as a "local" issue by government – and funded sporadically – motoring is treated as "national" issue and given secure national funding. The Assessment carries on this tradition, calling on ministers to work with councils and private companies to deliver a national network of charging points for electric vehicles.

The Assessment says cycling should be promoted – which is the government’s current line – but doesn’t make concrete recommendations on physical infrastructure that would truly boost cycling.

"More investment in public transport, alongside the promotion of safe cycling and walking, is the only way that cities can increase their infrastructure capacity to support growth," says the report.

The Assessment at least revisits "induced demand" – the theory that building more roads simply leads to more congestion – saying that the "basic challenge of urban transport is still the same: there is simply not enough space in cities for everyone to travel by car."

Instead of recommending a national network of cycleways, the Assessment floats that idea that "it is possible to increase capacity by investing in high capacity public transport."

It recommends a "less car focused approach to urban transport … reallocating space from roads and parking to pedestrianised areas, leisure amenities and green space" but gives no solid guidance on how the government should do this.

Sustrans’ senior policy advisor Tim Burns said: “We welcome this long-term plan for infrastructure assessment, and particularly the recommendations to integrate strategies for housing, employment and transport and a £43 billion funding pot for financing stable long term transport investment for regional cities. It rightly recognises that cities need to make the best use of the limited space and adopt a less car focussed approach whilst promoting cycling and the need to carry out regular evaluations of cycle schemes.

“There is a growing body of evidence that demonstrates increasing cycling is key to keeping cities moving, and widespread public support for cycling, as shown in Bike Life 2017. It’s great to see city regions like Greater Manchester getting on with this."

However, he added that the Assessment is a "missed opportunity in seeing the potential and need for walking and cycling to be seen as a mainstream solution to urban congestion, and many other challenges our cities face. It contradicts its recommendations for a ‘people-focused’ approach in urban planning by placing too much emphasis on the need to invest in a ‘revolution in road transport’ for EVs and AVs.

“When considering that 92 percent of the UKs population will live in cities by 2030, local governments need clear and comprehensive guidance, based on robust evidence, to organise cities in a way that enables people to move around without the pollution and congestion that comes with excessive car use. Walking and cycling is a critical part of that and it should be prioritised in infrastructure strategies.”

He added: "The whole purpose of the UK’s first-ever National Infrastructure Assessment is to think beyond the technologies of today and to ensure we can make the most of future innovations. It’s why it’s not just a one-off but something we will be repeating every five years to ensure we remain on the front foot.”

Front foot? That’s almost the only mention of active travel in the report.