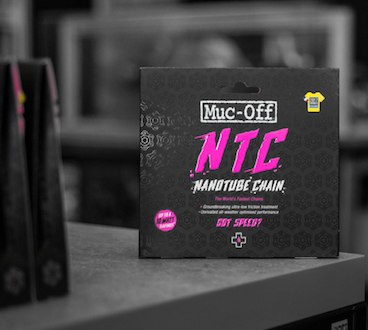 Muc-Off has announced the launch of its Nanotube Chain, or NTC. The company said the chain has been proven to offer more than ten watts of efficiency savings against leading drywax optimised chains.

Unlike chains treated with wax, the NTC is claimed to deliver performance in all weather conditions. This is even true in dry environments, where wax-based optimised chains suffer from a severe performance drop-off after a short amount of use, said a Muc-Off statement.

Testing on Muc-Off’s in-house "Chain Lube Optimisation Dynometer" has shown that the NTC can knock up to three miles off a 112-mile Ironman stage, claimed the company. This is calculated using the average time of six hours and 25 minutes when compared to using the leading wax-based optimised chain on the market over the same distance.

Muc-Off MD Alex Trimnell said: "The NTC is what we’ve been dreaming about ever since we launched our first ever bicycle chain lubricant in 2005. We’ve come a long way since then, working with some of the world’s top athletes and teams to push drivetrain optimisation to its absolute limit, and we’re happy to say that we can offer the fastest treatment we’ve ever developed. Critically, our nanotube formula lasts for hundreds of miles in all weathers without the risk of a severe performance drop off, which can easily happen with a wax-based treated chain after a very short period of use. This means you are then running on metal-to-metal, which could destroy your race times, not to mention potentially wrecking your components! The proof is all in the data."

The NTC is the natural evolution of Muc-Off’s Nano Optimised Chain, or NTOC. Developed in 2014, the nanotube formulation started its life as a joint-project between Muc-Off and Team Sky. Having produced an all-weather, high-performance lubricant for the pro team, the Poole-based company began experimenting with adding nanotubes to its formula.

The NTC will reach its optimum state after four hours of riding at 250+ watts. NTC is now available through Muc-Off’s global distribution channels. An advanced ‘top-up’ bottle of Nanotube Lube will also be available at launch, which will generate power savings within one to two watts of the original chain, said Muc-Off.