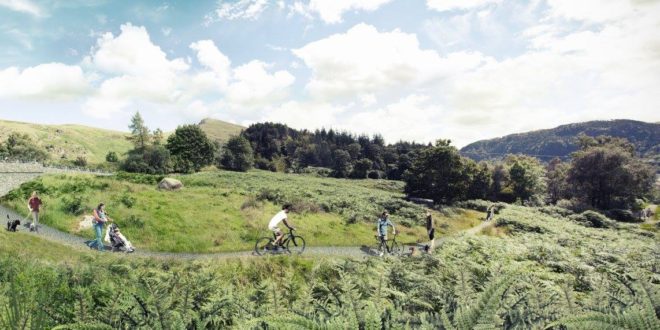 MoD shoots down plans for Cumbrian zipwire and its £800,000 protected cycleway

Reversing a previous decision the Ministry of Defence has now objected to a plan for a zip wire activity centre over the Thirlmere reservoir in the Lake District. This centre has plans to build a £800,000 protected cycleway, partly on the busy A591.

High-profile "zip-off" protestors – such as the broadcaster Melvyn Bragg – see no contradiction in saying they object to the zipwire scheme because it would lead to a loss of "tranquility" but then praising the MoD’s decision, saying military flights over the reservoir are preferable to a "fairground attraction".

The MoD said: "The proposed cable in this location poses a risk to low flying operations due to military aircraft not being able to readily identify wires or safely navigate away from them.

Previously the MoD had raised no objections to the plans. A statement from the zipwire scheme’s proposer – Treetop Trek – said:

"We have been in consultation with the MoD since June 2017 and … are therefore very surprised by this apparent change in stance and are currently seeking their further clarification."

Conservationists say plans for zipwires over Thirlmere would harm the “unspoilt nature” of the lake, a lake which is bordered by the busy A591 road.

Treetop Trek of Windermere wants to create the Thirlmere Activity Hub, centred on a zipwire attraction, but also providing a short stretch of 3-metre-wide family-friendly protected cycleway beside the A591. This is part of a £800,000 plan by the developer to improve an 18-mile cycle route around Thirlmere.

Men Behaving Badly star Caroline Quentin is one of many people to have objected to the zipwire scheme. In her role as president of the Campaign for National Parks she said: “My fear is that [the zipwire scheme] will spoil the peace and tranquillity of this beautiful, important place. I am all for development that enhances our National Parks but my instinct is that we should say no to zip wires in Thirlmere.”

Kate Ashbrook, general secretary of the Open Spaces Society, said: “These plans would make Thirlmere into Zipper-mere. The development would dominate this splendid landscape and destroy its peace.”

The British Mountaineering Council has also objected to the zipwire plans as has the National Trust, which claims that “this would risk setting a precedent for further damaging developments, which cumulatively, could result in significant harm to the special qualities of the National Park.”

According to a statement from Treetop Trek the zipwire attraction would not be out of place in its setting:

“The reservoir is a commercial development, surrounded by a commercial woodland, with eight car parks, three toilet blocks, a main road with an average of 6000 vehicles a day on it; it has commercial farming, hotels, B&Bs, pubs, café, camp sites, a cycle track, and a myriad of walking paths up each side of the valley including routes to Helvellyn."

The statement concluded that the scheme "does not increase the infrastructure, just improve what is already there.”

Also in favour of the scheme are Cumbria Tourism and the Lake District Park Partnership Business Task Force, both of which welcome the 50 or so jobs promised by the scheme, and also the year-round usefulness of the improved cycling infrastructure.

“The cycle way that is there is currently in need of significant investment,” said Treetop Trek, adding that the “scheme that has planning permission has not been completed due to lack of funds, including the southern underpass of the A591 for cyclists and the resurfacing of rough tracks.”

Much of the £800,000 investment would be spent on a cantilevered cycle underpass under the A591, providing easier gradient climbs and descents for family cyclists.

“The cycleway is not financially feasible without the zipline or grant funding,” said Treetop Trek.

The company’s plans are now with the Lake District National Park.

Share
Previous “Mutual respect on the roads is key to safety,” says Merlin Cycles MD
Next Missed out on Core this weekend? There’s still time