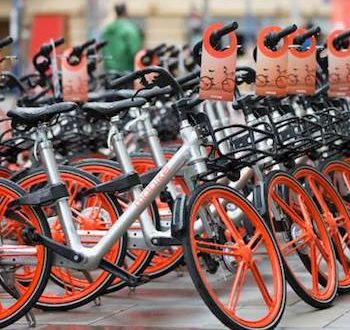 Ofo’s UK operations director Joseph Seal-Driver welcomed the release of the code of practice: "In a fast-growing sector, a transparent code of practice for all operators is a crucial way to give customers and local authorities the confidence that the highest industry standards will be upheld at all times."

“We are proud to be leading the way with responsible bike-sharing: developing our own UK charter, working with local bike shops to maintain our bikes and paying all employees the London Living Wage.”

Having started booming in China, app-based dockless bike sharing is now spreading around the world. It has the capability of "reshaping cities", one player has told BikeBiz previously. Billions of dollars are being pumped into dockless bikes not because of mobility but because of their data-mining potential.

And Ealing is the next location to get dockless bikes – Mobike today delivered 750 bikes to Ealing Central and Acton. This is with say-so of Ealing Borough Council. Earlier in the year Mobike launched a council-backed bicycle sharing scheme in Manchester.

Mobike’s UK general manager Steve Pyer said: “We’ve had really productive discussions with local businesses and organisations in the past few months, and we are all committed to leveraging Mobike to develop the bike sharing culture across the borough, and get people cycling more."

He added: "We have also invested in a local workforce to support the scheme’s distribution, as we are eager to be a strong long term partner for the local community, and London more widely.”

Mobike has partnered with Havebike which will provide around-the-clock monitoring, maintenance and refurnishing of the parking areas.

Havebike MD Nick Brown said: “Not only will Mobike help more Londoners and tourists explore our great city by bike, they will also help encourage more people to cycle in our ever increasingly cycle friendly city."

Mobike has also been working closely with Ealing council to ensure a tailored and controlled distribution of the bikes to the most suitable locations within the borough – to maximise cycle usage and complement the existing transport landscape.

Ealing council leader Julian Bell said: "It’s good to see that Mobike is taking a cautious approach to introducing their bikes to ensure they are a success. I’m sure our residents will park them sensibly and help the scheme to run smoothly.”

In the UK, Mobike’s connectivity is provided by Vodafone. In the US it’s provided by AT&T alongside Qualcomm.

With this connectivity Mobike can get bikes to the locations where they are needed most. The AT&T network also lets Mobike capture detailed usage data from every bike. During high demand, Mobike can even offer app users incentives to move bikes from more remote locations to more populous areas of the city. This data can help with smart bike fleet distribution and city planners’ smart urban transportation infrastructure.

“By providing IoT connectivity for Mobike, we’re advancing both the sharing economy and the future of smart cities in a meaningful way,” said “This relationship is allowing us see some of the tangible benefits of how IoT can help address significant social and environmental challenges."

“The MDM9206 LTE IoT modem is purpose-built to support global multimode capabilities and global spectrum bands which solves complexity challenges, and allows innovative IoT providers such as Mobike to adopt a single SKU approach and quickly bring cost-effective services to consumers in multiple regions around the world.

Mobike launched in Shanghai in April 2016, and has since expanded the service to over 160 cities around the world. Based on calculations by WWF China, users have taken 350,000 cars off the road for a year. In June, Mobike received the WWF’s “Climate Solver Sustainable Urban Mobility Special Award” in recognition of the impact its innovative technology and promotion of sustainable transport.