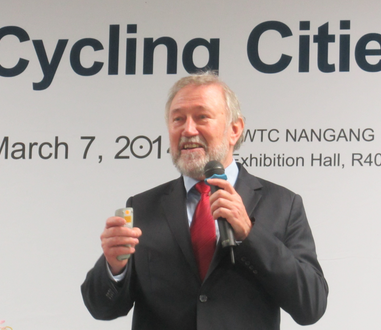 In a recent mailing to members, the ECF Board announced that Manfred Neun is to stand down as president of the organisation from January 1st, after 12 years.

An official statement from the ECF Board explains how it intends to navigate the transition period between the January 1st and the Board elections, to be held at the AGM 2018 in Milan on May 19th, 2018.

The Board’s statement paid tribute to Manfred’s achievements and announced that vice president Lars Strömgren, currently president of ECF member Cykelfrämjandet in Sweden, will assume the responsibilities of the president as ‘acting president’ from January 1st, 2018 until the next Board elections.

The Board said: “As you may be aware ECF President Manfred Neun announced at the ECF Board Meeting at the end of April 2017 and to all delegates at the AGM (June 2017) that, after more than 12 exceptional years of service to our federation, he will not seek re-election at the AGM 2018. At our last Board Meeting in October Manfred asked us to accept that he intends to step down, effective from December 31st 2017 and the Board has accepted this as his official resignation.

We are grateful for Manfred’s words of confidence about our work and would like to express now our appreciation for his achievements during an extraordinary period of growth and change for ECF. Manfred will be leaving us with a huge legacy, which we will celebrate together with him at the 2018 AGM in Milan where he will be the honoured guest of the Board.”

Neun also sent a letter to members explaining his reasons for standing down: “During the last ECF AGM, I informed your delegates that I had decided not be a candidate for re-election as ECF President at the 2018 AGM, allowing me to retire from the post after more than 12 exceptional years.

“I am sure you will understand my reasons, in particular more time for my family, for more research and publications, and also because I have the feeling that it’s the right time. I am excited and satisfied to reflect on the positive development of the past years and the positive path for the future.

This is a message of support for the Board. I am hugely impressed by the performance of the current Board, both longer standing members and new joiners this year. It is clear they are going to oversee development of the new ECF Vision 2030, the setting up of the newly independent World Cycling Alliance and to handle the governance of the presidential transition with great professionalism. In this regard I believe I should step aside now to give them the maximum space and time to develop our organisation in these and other directions.”