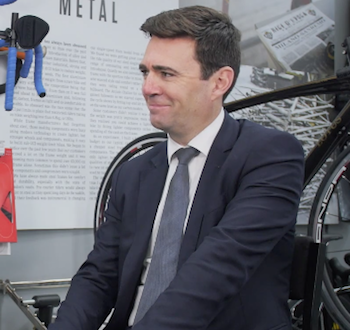 Andy Burnham MP pledged to build a major new cycling network if he is elected the first-ever Mayor of Greater Manchester. He made this promise – and others – in a Cycling UK interview with Channel 4 news anchor Jon Snow. (Snow is president of Cycling UK.)

Burnham envisages a dedicated cycling budget for the city, new infrastructure, a bike share scheme and the ultimate goal of reaching London’s funding figure of £17 per head for cycling.

The Labour MP for Leigh was grilled by Snow in Condor Cycles’ central London shop. Snow opened the interview expressing concern that “Britain is stuck in an obesity epidemic. Our towns and cities remain congested with traffic, and air pollution levels are spiralling out of control”.

Looking to the local elections across the UK, Snow pointed to local decision makers as having “the opportunity to right these wrongs.”

Burnham noted that: “I’m a big believer in physical activity … not just the physical health benefits but the mental health benefits. If you look at Greater Manchester, too many people are trapped in their cars. We need to make our city more liveable.”

He added: “We have been the medals factory that has kick-started so much Olympic success, but if you go out on to the roads of Greater Manchester you see very few people cycling. So we have got an opportunity here to put that right, to learn from where London got things right, where they got it wrong, and come back with a really strong plan to boost cycling across the city region.”

Snow will be interviewing a number of political figures ahead of the "Metro Mayoral" and local authority elections taking place on 4th May in England, Scotland and Wales, and the Northern Ireland Assembly elections, which take place on 2nd March.