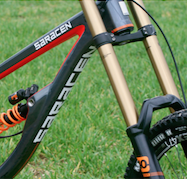 The new-look Team Myst will be on show for the 2017 season with a brand new paint job.

Whereas the frame for the 2017 season has largely remained unchanged, the pearlescent clear lacquer over race carbon finish with the Madison Saracen red brings a new flash of colour to the design.

The orange accents throughout were designed to fit with the Fox suspension and also compliment the new kit from Madison Clothing with a uniform aesthetic.

As well as Alex Marin, Maxxis Tyres has also joined Madison Saracen for the coming season, with the goal of adding increased speed and control to the lineup.

Saracen brand manager Jack Geoghegan said: “Every year – when we see the Saracen Myst line up at a world cup start line – it makes all the hard work and time we have invested into this race machine extremely worthwhile. We work closely with Will Longden and use rider feedback to bring race ready machines straight from the box to the market. Whether racing your local series or attacking the world cup scene, the Myst is ready to go.”

Team manager Will Longden added: “The new Myst team bikes are looking awesome! They look even better with a bit of sunshine on them; I can’t wait to get the team back on the road when the World Cup kicks off in Lourdes, France in just six weeks’ time.

“We have all been working hard over the winter, fine-tuning set-ups and the riders are training hard to get in the best possible shape. Next stop for the riders is the two warm-up up races in Portugal before heading home for the first British Downhill Series race of the year. The team is looking better than ever with the new bikes and Madison Clothing kit, all we need now is some results to match it!”

Marc Beaumont, who is going into his second year with the team, concluded: “It’s great to have a new look; I like the gear and think it’s making a big statement. Last year the bike was bold and the kit quite mellow, so great to reverse that with kit that pops off and a subtle bike design that gives a complete look for the team. Pre-season has been ace and building into the season nicely, so can’t wait get started and hopefully bag some good results.”