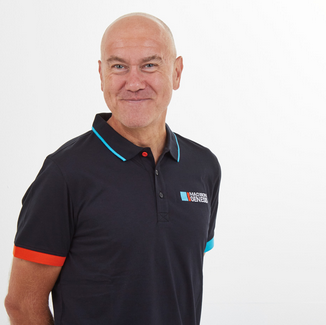 Madison Genesis has announced the appointment of Colin Sturgess as team manager.

Individual Pursuit world champion in 1989, British National champion on the road in 1990, a Commonwealth Games medallist in 1986 and 1998, Sturgess has a wealth of experience to share.

“I’m stoked to be joining Madison Genesis, a team I’ve held in high regard since their inception,” Sturgess said. “For any nascent DS a move to such a progressive team is a privilege. I look forward to working with both experienced riders and nurturing some of the country’s best up-and-coming talent.

“Madison has built a legacy with this team and I thank them for this opportunity. The team backing, sponsors and structure is second-to-none. So in short, we have no excuses. Let’s go out there and win bike races.”

Sturgess will be replacing outgoing Madison Genesis team manager Mike Northey, who made the decision to move back to New Zealand with his young family.

Although sad to be leaving, Northey is excited to see Sturgess take over the team:“It was a hard decision to make, as I have so many fond memories with Madison. But one of my main concerns was finding the right person to take over the team. I think Colin will be the perfect match to the team. He’s a kind, well-respected man with a wealth of knowledge and I wish him and the guys all the best for 2018.”

Madison CEO Dominic Langan added: “Following a very successful tenure with Mike Northey I’m delighted to welcome Colin Sturgess as the next team manager of Madison Genesis. Colin brings with him a wealth of experience, a highly regarded palmarès and a calm and personable demeanour which I believe will help get the best from both riders and support staff. It’s a genuinely exciting new chapter for the Madison Genesis team.”

Madison Genesis will now begin the process of building towards next season after a successful 2017 that included a top-five finish at the Tour de Yorkshire, Connor Swift bagging a hat-trick of victories and an impressive showing at the Tour of Britain, featuring in several of the race’s breakaways.

Previous IN MY TEAM: Volt
Next Priest says Cycle Superhighway could do more harm than the Luftwaffe