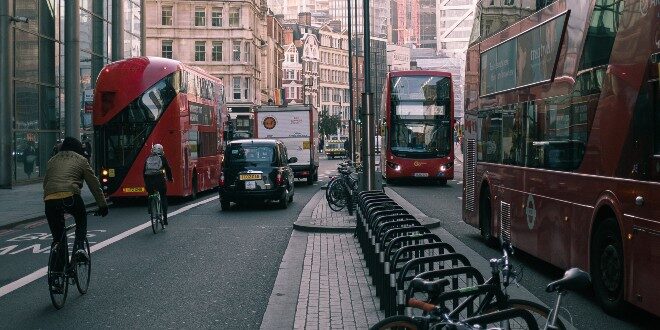 London could be at a ‘tipping point for cycling’, according to new analysis

Campaigners behind City Ratings, a new data analysis tool ranking world cities for cyclability, have suggested London could be on the precipice of ‘exponential growth’ in cycling – although the UK is still ‘lagging behind’ other countries in the development of cycle-friendly cities.

City Ratings is a ranking of cities’ cyclability by US campaign group PeopleForBikes which has been calculated annually since 2017. For the first time in 2021, City Ratings expanded to 768 cities worldwide, which included five UK cities. The aim of this data is to spotlight the best cities and towns for cycling, as well as provide city leaders with actionable insights to make cycling better in their communities.

This year’s ratings draw from two key factors: the quality of the cycling network in a region (Network Score) and community perceptions of cycling (Community Score). The first is sourced from the PeopleForBikes Bicycle Network Analysis and the second from surveys with local residents and advocates about bicycling in their city.

London is the only UK city to make it to the top 50 cities, (43), and placing 15th when just looking at large cities. Overall London, Birmingham, Edinburgh, Manchester and Glasgow score well on safe cycling links to retail centres, places of education and employment, and some score well on access to recreation spaces, based on data taken from April 2021. London scored more than 50 overall, which tends to preface exponential growth in cycling.

In a year the capital has broken its own records for cycling, further rapid growth in infrastructure could tip this balance in favour of rapid growth. According to PeopleForBikes, every ten points increase correlates to linear growth in ridership. A score of 50 indicates there’s enough cycling infrastructure in place for more rapid cycling growth, a point at which ridership “breaks from a linear relationship to an exponential relationship”. At this point, cycling starts to become more convenient than driving.

The data also highlighted London’s weak points. Topics like neighbourhood links and cycling access to transport hubs. 50% of London’s roads are now 20mph, with more to come, a factor that could improve cycling and walking safety across the capital. PeopleForBikes says greater 20mph speed limit coverage would improve London’s score, as would more and better cycling links to transport hubs.

UK cities are less successful at cycling links to transport hubs, and at connecting neighbourhood streets by bike. All scores are out of 100. Cycling access to essential services, such as hospitals, varies widely between five UK cities, with Glasgow scoring just 26 of 100 in that category, and Edinburgh topping the UK leader board at 63. Glasgow comes in last in almost every metric, bar access to transport hubs, where Birmingham is
bottom of the league.

People for Bikes’ Kyle Wagenschutz said: “London joins a growing list of cities focused on rapidly growing their connected bicycle networks. Success stories from past achievements in Sevilla and New York City inspire more recent action in cities like London, Paris, Austin
(TX), and Denver (CO). There is a story to be told about rapid network expansion, and London is among the cities showcasing this facet of work.”

In the global ranking, three Dutch cities take the top three spots: Utrecht (83/100), Zwolle (82/100) and Groningen (82). In Utrecht, a city with less than 360,000 residents, 98% of households own at least one bike, with city officials spending around £39 million a year building and improving its infrastructure and facilities, with ample cycle parking provided.

Sevilla, in Southern Spain, has transformed its streets for cycling from 2007, constructing an 80km network in just 18 months with $42 million, cutting nearly 5,000 parking spaces to make room for cycling. The city’s network has continued to be improved and serves 70,000 cycling trips a day.

The data tool also showcases stress heat maps which reveal which parts of cities’ networks are pleasant for cycling and which are stressful, based on speed limits, road width and cycle lanes.

“It is our belief that communities with at least 50% connectivity (an admittedly oversimplification of what a City Ratings score means), community members begin to believe that bicycling can be more convenient than driving,” said Wagenschutz. “The network allows for encouragement, incentive, and promotional programmes to be delivered with a measure of belief.

“High-speed roads, dangerous junctions, and confusing designs consistently push people to drive, even when popular desire is to travel by another method. And though there are cities that have been building bike networks for many years, too few have the types of infrastructure in place necessary to support rapid growth of cycling among people of all ages and abilities.”

He continued: ‘Because most people are interested in cycling only when it’s a comfortable experience, our maps recognise only low-stress biking connections. Assessed on a 100 point scale – where 100 implies perfect connectivity to every destination – City Ratings helps paint a picture of whether cycling infrastructure connects people to common destinations; parks, shops, schools, public transportation, and places if work to name a few.”

Previous An open letter on retail
Next Pinkbike, CyclingTips and Trailforks join Outside family