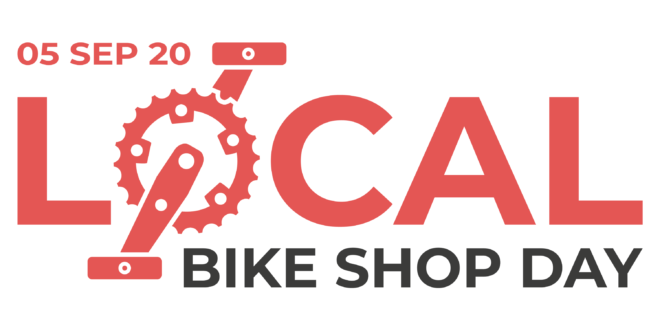 This year’s Local Bike Shop Day was the “most successful date yet”, with a record number of bike shops and customers celebrating across the UK, organisers have said.

The number of bike shops registered on the Local Bike Shop Day website rose by 77%. During the day, the hashtag #supportyourlocalbikeshop had a reach of 360,025, an increase of 380% in comparison to last year, as well as having over 400,000 impressions. The Local Bike Shop Day website had over 5,000 unique visitors with the most popular page being the find a local bike shop search facility.

The postponed date, 5th September, celebrated two key themes – encouraging children to start cycling when they return to school and keeping the nation cycling into autumn. 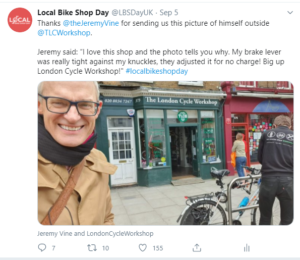 In addition to cycling organisations, the day was promoted by a variety of MPs and non-cycling organisations, including Small Business Saturday and Indie Retail. A few well-known faces such as Jeremy Vine, Gail Porter and Sharron Davies also got on board. The day reached over 800,000 impressions, most of which were on consumer-facing channels.

Cyclescheme also gifted six shops £150 worth of vouchers to treat themselves and their staff to a night out. The winners were Belhaven Bikes, Dunbar, The Marlborough Bike Company, Marlborough, Saddles and Paddles, Exeter, TT Cycles, Bradford on Avon, Altrincham Bikeshak, Cheshire, and Balfe’s Bikes, London.

Owner of one of the winning bike shops, Heather from Saddles and Paddles, said: “I always try to support initiatives like Local Bike Shop Day as they help small businesses like mine reach out to customers, both new and old, while being part of a bigger movement. There’s never been a more important time to support local, independent shops and so I was keen to use Local Bike Shop Day to remind people of all the benefits of shopping with us, rather than chains or online stores.”

Paul Corcoran at Pennine Cycles experienced increased footfall on the day in comparison to the usual Saturday trade: “It’s always great to get involved with Local Bike Shop Day and be part of the UK wide community and raise our profile and let customers see we are part of a bigger community.”

Cyclescheme also gave four customers who visited a participating shop and requested or redeemed a Cyclescheme certificate the chance to win a £250 cycling gift card. Jane Atkin, Giant Liverpool customer competition winner, said: “I had one of the best experiences in the Giant store in Liverpool.

“The team were so passionate and enthusiastic about cycling and the brand and making the time to make sure the bike was right for me. I travelled up from Sheffield to Liverpool to get the bike I wanted and am looking forward to returning in a few weeks for a free service and now to use my vouchers!”

Event organisers the ACT will now be aiming for LBSD 2021 to grow further still.

Previous £2.4 million Bradley to Brighouse Greenway to provide ‘missing link’ in current infrastructure
Next How has a lack of bike shows in 2020 affected businesses within the industry?