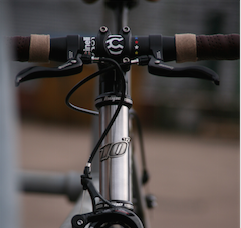 Each bike from the Trillion by Liberty range will use British-made frames and be hand-built to customer specifications using only high-grade named components.

The launch of the bikes marks a key step towards Liberty’s goal of re-establishing its manufacturing of high-value cycling products in Britain. Under its GreenSteel strategy, Liberty has invested a reported £500 million in UK steel and engineering assets over the past 18 months; the brand now aims to develop more downstream manufacturing capabilities as part of a low-carbon supply chain.

The Leamington Spa-based company is now introducing the Node single-speed commuter, the Prime Reynolds 853 steel all-mountain and the 22 Superior titanium road bikes to the range.

Liberty Trillion general manager Lawrence Bryan said: “The latest products by Liberty are designed to create a perfect balance between handling, strength, longevity and individuality, at prices that are accessible to both the average rider and the dedicated enthusiast.”

He added: “Liberty Trillion prides itself on the fact that all our frames are hand-built in the UK and our bikes use only high-grade named components. We offer our customers a wide choice so they can create a bike as individual as themselves. Our products are of the highest quality and we are aiming to establish our reputation alongside respected brands such as Pinarello, Colnago or De Rosa.”